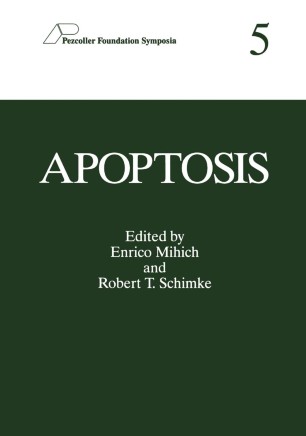 The fifth Annual Pezcoller Symposium entitled, Apoptosis, was held in Trento, Italy, June 9-1I, 1993 and was focused on the specific phenomena leading to Programmed Cell Death (PCD) or Apoptosis, and the mechanisms involved. With presentations at the cutting edge of progress and stimulating discussions, this Symposium addressed the genetics and molecular mechanisms determining PCD and the role of this suicidal process in cancer and the immune system. The functions of pS3, c myc and bel 2 in affecting apoptosis in different cell types and the role of ions and intracellular pH changes and that of intranuelear endonueleases are given particular emphasis as are the effects of anticancer agents, hormone imbalances and growth factors. The role of pS3, a tumor suppressor gene, in inducing PCD is discussed in detail as pertinent to hematological and non-hernatological tumors. The requirement of pS3 for the induction ofapoptosis by ionizing radiation or adenovirus oncoproteins is outlined. Decision points during the cell cyele affecting the cascade ofevents leading to PCD are discussed as is their role as "switches" under the control of c-myc and bel-2 proteins or the influence of cyele specific drugs. The concurrent requirement of multiple signals in determining apoptosis is emphasized. The examples of the role of PCD in the regulation of hematopoiesis, and in the generation of antigen-specific immune repertoire are illustrated.