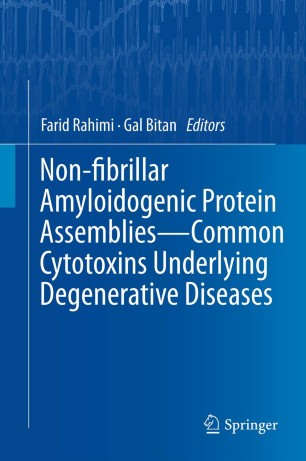 Aberrant protein folding and self-assembly underlie over 30 human diseases called amyloidoses, for which currently there is no cure. The diseases range from tissue-specific to systemic and from genetic to sporadic. Some of the most devastating amyloidoses are those that affect the central nervous system (CNS), such as Alzheimer’s disease (AD), Parkinson’s disease (PD), prionoses (e.g., mad-cow disease), and amyotrophic lateral sclerosis (Lou Gehrig’s disease). In each disease, one or more proteins self-associate into toxic oligomers that disrupt cellular function and communication, and proceed to form insoluble amyloid aggregates characterized by fibrillar morphology and cross-β structure.

The first decade of the 21st century has brought with it significant progress in our understanding of amyloid diseases, including the physiological and pathological processes involving each of the offending proteins. Important developments also provide now improved diagnoses of different amyloidoses and new approaches are being developed towards disease-modifying therapies. This book covers the current state-of-the-art knowledge on amyloidoses as a general phenomenon and offers detailed reviews of individual amyloid-forming proteins and specific diseases.