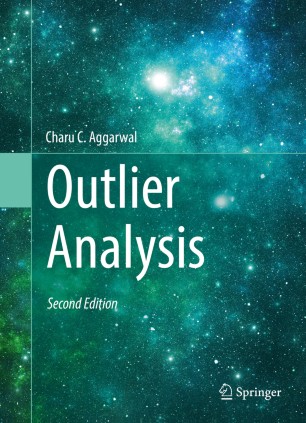 This book provides comprehensive coverage of the field of outlier analysis from a computer science point of view. It integrates methods from data mining, machine learning, and statistics within the computational framework and therefore appeals to multiple communities. The chapters of this book can be organized into three categories:
The second edition of this book is more detailed and is written to appeal to both researchers and practitioners. Significant new material has been added on topics such as kernel methods, one-class support-vector machines, matrix factorization, neural networks, outlier ensembles, time-series methods, and subspace methods. It is written as a textbook and can be used for classroom teaching.

Charu C. Aggarwal is a Distinguished Research Staff Member (DRSM) at the IBM T. J. Watson Research Center in Yorktown Heights, New York. He completed his undergraduate degree in Computer Science from the Indian Institute of Technology at Kanpur in 1993 and his Ph.D. in Operations Research from the Massachusetts Institute of Technology in 1996. He has published more than 300 papers in refereed conferences and journals, and has applied for or been granted more than 80 patents. He is author or editor of 15 books, including textbooks on data mining, recommender systems, and outlier analysis. Because of the commercial value of his patents, he has thrice been designated a Master Inventor at IBM. He has received several internal and external awards, including the EDBT Test-of-Time Award (2014) and the IEEE ICDM Research Contributions Award (2015). He has also served as program or general chair of many major conferences in data mining. He is a fellow of the SIAM, ACM, and the IEEE, for “contributions to knowledge discovery and data mining algorithms.”

“This book presents an extensive coverage on outlier analysis from data mining and computer science perspective. Each chapter includes a detailed coverage of the topics, case studies, extensive bibliographic notes, a number of exercises, and the future direction of research in this field. The book is a good source for researchers also could be used as textbook in the related discipline.” (Morteza Marzjarani, Technometrics, Vol. 60 (2), 2018)​
Buy options