A Journey in Mathematics Education Research 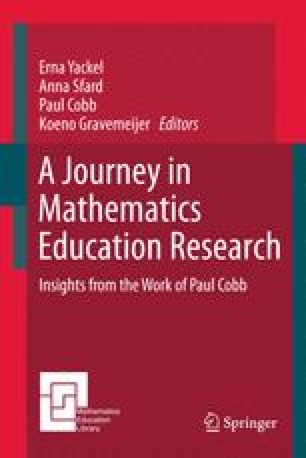 A Journey in Mathematics Education Research pp 1-5 | Cite as

The last quarter of the twentieth century has seen fundamental shifts in educational theories. These shifts were initiated by the research of Fullan and Pomfret (1977), which revealed fundamental flaws in the curriculum-innovation model of “research, development, and diffusion,” known as the RDD model. These flaws showed that one of the key pillars of the RDD model, the presumed fidelity of the implementation of new curricula, could not stand a reality check. They found that the actual implementation process was better described as a mutual adaptation of both the users of the curriculum and the curriculum itself. Also the limitations of corresponding theories about instructional design, such as Gagné’s “principles of instructional design” (Gagné & Biggs, 1974) and Bloom’s “mastery learning” (Bloom, 1968), both of which focused on learning outcomes, were revealed. Finally, the underlying theories, behaviorism, and later information processing proved ineffective in improving instruction, especially in mathematics. In mathematics education, these shifts coincided with a push for mathematics as a sense-making activity, in which problem solving, understanding, and applying were central tenets. As a consequence, a broad scope of new theories and new approaches in education in general, and in mathematics education especially, had to be developed to replace the discredited ones. We may note, however, that according to Kuhn (1970) scientific theories are not abandoned merely because of the problems they encounter. Instead, theories are abandoned only when there are new theories available that better explain observed phenomena.

Mathematics Education Instructional Design Mathematical Learning Person Plural Reality Check
These keywords were added by machine and not by the authors. This process is experimental and the keywords may be updated as the learning algorithm improves.

[R]esearch is literally that—an unending process of searching. The scientist [or researcher] arrives not at some final answer but a deeper set of questions. There’s always a bit further to go, a bit more to learn…