Progress in the Chemistry of Organic Natural Products 102 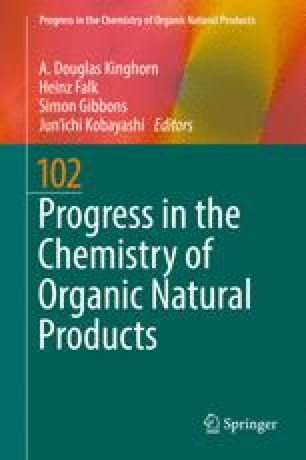 The Laurencia Paradox: An Endless Source of Chemodiversity

Chapter
Part of the Progress in the Chemistry of Organic Natural Products book series (POGRCHEM, volume 102)

Nature, the most prolific source of biological and chemical diversity, has provided mankind with treatments for health problems since ancient times and continues to be the most promising reservoir of bioactive chemicals for the development of modern drugs. In addition to the terrestrial organisms that still remain a promising source of new bioactive metabolites, the marine environment, covering approximately 70% of the Earth’s surface and containing a largely unexplored biodiversity, offers an enormous resource for the discovery of novel compounds. According to the MarinLit database, more than 27,000 metabolites from marine macro- and microorganisms have been isolated to date providing material and key structures for the development of new products in the pharmaceutical, food, cosmeceutical, chemical, and agrochemical sectors. Algae, which thrive in the euphotic zone, were among the first marine organisms that were investigated as sources of food, nutritional supplements, soil fertilizers, and bioactive metabolites.

Red algae of the genus Laurencia are accepted unanimously as one of the richest sources of new secondary metabolites. Their cosmopolitan distribution, along with the chemical variation influenced to a significant degree by environmental and genetic factors, have resulted in an endless parade of metabolites, often featuring multiple halogenation sites.

The present contribution, covering the literature until August 2015, offers a comprehensive view of the chemical wealth and the taxonomic problems currently impeding chemical and biological investigations of the genus Laurencia. Since mollusks feeding on Laurencia are, in many cases, bioaccumulating, and utilize algal metabolites as chemical weaponry against natural enemies, metabolites of postulated dietary origin of sea hares that feed on Laurencia species are also included in the present review. Altogether, 1047 secondary metabolites, often featuring new carbocyclic skeletons, have been included.

The chapter addresses: (1) the “Laurencia complex”, the botanical description and the growth and population dynamics of the genus, as well as its chemical diversity and ecological relations; (2) the secondary metabolites, which are organized according to their chemical structures and are classified into sesquiterpenes, diterpenes, triterpenes, acetogenins, indoles, aromatic compounds, steroids, and miscellaneous compounds, as well as their sources of isolation which are depicted in tabulated form, and (3) the biological activity organized according to the biological target and the ecological functions of Laurencia metabolites.