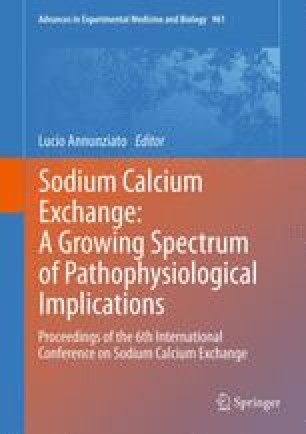 Mitochondria Na+-Ca2+ exchange (NCXmit) was first discovered by Carafoli et al. in 1974. Thereafter, the mechanisms and roles of NCXmit have been extensively studied. We review NCXmit in cardiomyocytes and lymphocytes by presenting our recent studies on it. Studies of NCXmit in rat ventricular cells demonstrated that NCXmit is voltage dependent and electrogenic. A targeted knockdown and knockout of NCLX in HL-1 cardiomyocytes and B lymphocytes, respectively, significantly reduced the NCXmit activity, indicating that NCLX is a major component of NCXmit in these cells. The store-operated Ca2+ entry was greatly attenuated in NCLX knockout lymphocytes, suggesting that substantial amount of Ca2+ enters into mitochondria and is released to cytosol via NCXmit. NCXmit or NCLX has pivotal roles in Ca2+ handling in mitochondria and cytoplasm.

Mitochondria are pivotal organelle as master switches of cell fate upon exposure of various stimuli, modulators of cell excitability, as well as ATP producing factories (Bernardi 1999; Murgia et al. 2009; Celsi et al. 2009). Mito­chondrial Ca2+ dynamically changes upon stimulation by various ligands, and several enzymes in mitochondria are regulated by Ca2+. Therefore, Ca2+ has been considered as one of the important regulators of mitochondria function.

Carafoli et al. (1974) first discovered Na+-dependent Ca2+ release from mitochondria. Thereafter, the mechanisms and roles of mitochondrial Ca2+ handling have been extensively studied (Carafoli 2010). In many cells, Ca2+ mainly enters into mitochondria through Ca2+ uniporter (CaUni) and is released via Na+-Ca2+ exchange (NCXmit) and H+-Ca2+ exchange (HCXmit) (Bernardi 1999). In the last few years, genes responsible for these mitochondrial Ca2+ carriers were discovered, and our understanding of mitochondrial Ca2+ dynamics is being updated drastically. Here, we review roles and biophysical properties of NCXmit, especially focusing on NCXmit in cardiomyocytes and lymphocytes.

Figure 16.1b summarizes mitochondrial Ca2+ carriers. Ca2+ enters mitochondria through a Ca2+-selective channel, CaUni, according to a large negative membrane potential of −150  ∼  −180 mV (Kirichok et al. 2004). The molecule was identified recently by Baughman et al. (2011) as MCU or CCDC109A. A regulator of CaUni was also discovered (MICU1 or CBARA1; Perocchi et al. 2010). A mitochondria ryanodine receptor (RyR) and a rapid mode of Ca2+ uptake (RaM) have been suggested as additional Ca2+ influx pathways (Ryu et al. 2010). Mitochondrial Ca2+ is extruded by HCXmit and/or NCXmit. NCXmit exists in many tissues such as brain, adrenal cortex, parotid gland, skeletal muscle, and heart (Crompton et al. 1978). However, its activity is absent or weak in liver, kidney, uterus muscle, and ileum muscle (Crompton et al. 1978), where HCXmit has a dominant role in extruding mitochondrial Ca2+ (Bernardi 1999). Letm1 and NCLX were recently identified as a responsible gene for HCXmit (Jiang et al. 2009) and NCXmit (Palty et al. 2010), respectively.

16.2.3 Ca2+ Communication Between SR/ER and Mitochondria

Sarcoplasmic reticulum (SR) and endoplasmic reticulum (ER) are major Ca2+ stores within the cells. Mitochondria locate closely to SR/ER, and narrow interorganellar spaces exist between the organelles. Interestingly, a voltage-dependent anion channel of outer mitochondrial membrane and an inositol1,4,5-trisphosphate (InsP3) receptor (IP3R) of ER are suggested to locate in the interorganellar regions and create a Ca2+ pathway from ER to mitochondria (Mendes et al. 2005; Szabadkai et al. 2006; Csordás and Hajnóczky 2009). Ca2+ released from RyR on SR also accumulates in mitochondria (Sharma et al. 2000). Thus, SR/ER and mitochondria are functionally related with each other via Ca2+.

Several studies suggested that reverse Ca2+ movement, from mitochondria to ER/SR, is also important. It was reported that an inhibition of NCXmit by CGP-37157 attenuates ER Ca2+ uptake in HeLa cells, endothelial cells, and vascular smooth muscle cells (Arnaudeau et al. 2001; Malli et al. 2005; Poburko et al. 2009), though the specificity of the drug is uncertain. In our studies on DT40 and A20 B lymphocytes (Kim et al. 2012), the targeted knockout or knockdown of NCLX caused a drastic decrease of ER Ca2+ content, demonstrating the essential role of NCXmit (NCLX) in mitochondria-ER ­communication. Therefore, considerable amount of Ca2+ probably recycles between mitochondria and ER, and the inter-organelle Ca2+ recycling may be pivotal for maintaining ER Ca2+ content.

Ca2+ is an important second messenger in the lymphocyte activation by antigen. Upon the antigen binding to the surface receptor of lymphocytes, InsP3 increases and facilitates Ca2+ release from the IP3R on the ER membrane. The subsequent Ca2+ depletion of ER causes translocation of the stromal interaction molecule 1 to the vicinity of plasmalemma, inducing sustained and oscillatory cytoplasmic Ca2+ increase by the activation of SOCE through Ca2+ release-activated Ca2+ channel encoded by ORAI1 (Feske 2007; Vig and Kinet 2009). The mitochondrial Ca2+ sequestration and/or the mitochondria metabolites have been reported to fine-tune the amplitude of SOCE (Hoth et al. 1997; Parekh 2008). Interestingly, mitochondria accumulate in the vicinity of immunological synapse in Jurkat T cells upon the T cell receptor activation (Quintana et al. 2007), which may support the sustainment of cytoplasmic Ca2+ elevation by facilitating SOCE.

Crompton et al. (1977) demonstrated that Li+ can substitute for Na+ in promoting mitochondrial Ca2+ efflux. This property is distinctly different from plasma membrane Na+-Ca2+ exchange (NCX) which cannot mediate Li+-Ca2+ exchange, but its reverse exchange is stimulated by external Li+ (Matsuoka and Hilgemann 1994; Blaustein and Lederer 1999; DiPolo and Beaugé 2006). Interestingly, a point mutation of threonine 103 to valine or cysteine in canine NCX1 increases an apparent affinity of the exchanger for cytoplasmic Na+ and produces a significant Li+-Ca2+ exchange (Doering et al. 1998). The threonine residue is conserved among all members of NCX, NCKX, and NCLX, whereas only in NCLX the amino acid preceding threonine is valine (Palty et al. 2004). Mechanisms for transporting Li+ may be similar to those for Na+.

Figure 16.2a demonstrates NCXmit activity in permeabilized rat ventricular myocytes (Kim and Matsuoka 2008). After loading the mitochondria with Ca2+, Ca2+ efflux from mitochondria via NCXmit was activated by the Ca2+ removal from and the Na+ addition to the bath solution. The decay of mitochondrial Ca2+ monitored by Rhod-2 was clearly dependent on cytoplasmic Na+, having a half maximum concentration (K1/2) of cytoplasmic Na+ of ∼1 mM and Hill coefficient of 3.8 (Kim and Matsuoka 2008). It has been reported that the K1/2 of Na+ for the mitochondrial Ca2+ efflux was 2–12 mM in the isolated mitochondria (Crompton et al. 1976, 1978; Hayat and Crompton 1982; Wingrove and Gunter 1986; Cox and Matlib 1993) and reconstituted mitochondrial Na+-Ca2+ exchange (Paucek and Jabůrek 2004). Our data show higher Na+ affinity of NCXmit. Despa et al. (2002) demonstrated that resting cytoplasmic Na+ in the rat ventricular myocyte is ∼10 mM and that Na+ increased linearly to 15 mM when beating frequency was increased to 2.5 Hz. Therefore, under the physiological concentration, Na+ binding to NCXmit is probably saturated, and further increase in cytoplasmic Na+ will not activate turnover of NCXmit.

The dependence of NCXmit on mitochondrial membrane potential (ΔΨ) has been controversial. In early studies by Crompton et al. (1976, 1977), electrogenic or voltage-dependent Na+-Ca2+ exchange was suggested, considering the Hill coefficient for cytoplasmic Na+ of ∼3 and the attenuation of Na+-dependent Ca2+ efflux by membrane depolarization induced by an uncoupler. A later study by Jung et al. (1995) further supported their conclusion by measuring matrix pH and Ca2+ with fluorescence probes. To the contrary, Affolter and Carafoli (1980) demonstrated that ΔΨ did not change when the Ca2+ efflux via NCXmit was induced and suggested NCXmit is electroneutral. Brand (1985) and Wingrove and Gunter (1986) also suggested the voltage-independent exchange.

16.3.2 NCLX in Cardiomyocytes and Lymphocytes

The gene-encoding NCXmit has not been found for a long time. Gobbi et al. (2007) indicated by immunocytochemistry that NCX1  ∼  3 localize in mitochondria of neurons and astrocytes of adult rat brain. However, functional evidence for the localization of NCX1–3 in mitochondria has not been demonstrated yet. In 2010, Palty et al. elegantly demonstrated that NCLX or NCKX6, which were previously cloned as an isoform of NCX or NCKX (Cai and Lytton 2004; Palty et al. 2004), is a gene-encoding NCXmit.

We investigated whether NCLX is functional in the cardiomyocytes using the HL-1 cells, a spontaneously beating cardiomyocyte cell line originated from mouse atrial myocytes (Claycomb et al. 1998). Although they can be serially passaged, it retains phenotypes of differentiated adult atrial cardiomyocytes (White et al. 2004). First, we confirmed the expression of mouse NCLX (mNCLX) mRNA in HL-1 cells (data not shown). Then we examined the contribution of NCLX on the NCXmit activity by knocking down the mNCLX. The activity of NCXmit, which was measured in a similar manner to Fig. 16.2a, was significantly slower in the mNCLX siRNA-transfected cells compared with that observed in the control siRNA-transfected cells (Fig. 16.2d). These results suggest that NCXmit activity, which had been demonstrated in ventricular myocytes, is preserved also in atrial myocytes and NCLX has a major role in mediating it.

NCLX also functions in non-excitable cell, lymphocytes. We studied NCXmit function by creating heterozygous NCLX knockout of chicken DT40 B lymphocytes (NCLX+/−) (Kim et al. 2012). As shown in Fig. 16.3a, cytoplasmic Na+-dependent Ca2+ efflux from mitochondria was greatly suppressed in NCLX+/− cells, indicating that NCLX is a major component of NCXmit, and also in lymphocytes. Mitochondrial Ca2+ ­spontaneously and slowly decayed even without cytoplasmic Na+. The slow spontaneous decay is probably mediated by HCXmit, whose activity is about one-third of NCXmit.

The Ca2+ accumulation in and the NCLX-mediated Ca2+ release from mitochondria are involved in SOCE as suggested by previous studies (Hoth et al. 1997; Parekh 2008; Quintana et al. 2007). As shown in Fig. 16.3b, the initial velocity of cytoplasmic Ca2+ rise induced by SOCE was not much affected in the NCLX+/− cells, suggesting Ca2+ influx pathways were not compromised. To the contrary, the peak amplitude of cytoplasmic Ca2+ was greatly reduced. The reduction is probably caused by Ca2+ trap in mitochondria of NCLX+/− cells, and this indicates that the majority of Ca2+ that entered via SOCE subsequently goes into mitochondria and is released to cytosol via NCXmit. In NCLX+/− cells, cytoplasmic Ca2+ rise induced by stimulation of B cell antigen receptor was also suppressed, indicating that NCXmit or NCLX plays pivotal role in ER-mitochondrial Ca2+ communication (Kim et al. 2012).

NCXmit is voltage dependent and electrogenic. NCLX is a major component of NCXmit in cardiomyocytes and B lymphocytes and has a pivotal role in Ca2+ handling in mitochondria and cytoplasm in these cells.