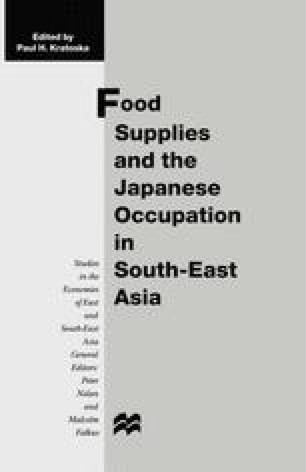 South-East Asia experienced grave rice shortages during the Second World War as a result of increasing demand on the part of the Japanese and maladministration of the wartime economy. Before the war there were three big rice-surplus areas in the region; the largest was Burma, which produced an average of 4.9 million tons of white rice annually between 1936 and 19401 and exported 3 million tons.2 Then followed French Indochina, with production of about 6.5 million tons and exports 1.5 million tons.3 The other rice-surplus country was Thailand, which produced about 3 million tons and exported half of this amount.4 Thus these three areas accounted for exports of approximately 6 million tons of rice annually in the pre-war period.5 Part of this grain was sent to nearby rice-deficit countries, such as the Philippines, British Malaya, the Straits Settlements, British Borneo, and the Netherlands East Indies. Among these territories, British Malaya had the largest deficit, and imported about 700 000 tons annually during the 1930s.6 After the needs of these South-East Asian countries had been met, large rice-surpluses remained which were exported to South Asia, East Asia and Europe.

Rice Mill Railway System Rice Distribution Deficit Area Japanese Occupation
These keywords were added by machine and not by the authors. This process is experimental and the keywords may be updated as the learning algorithm improves.
This is a preview of subscription content, log in to check access.