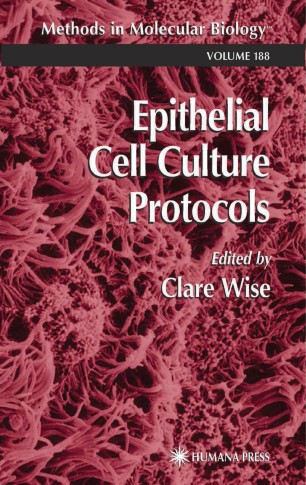 Many powerful new techniques for the isolation and culture of epithelial cells have been developed in the past decade. In Epithelial Cell Culture Protocols, a team of well-versed experimenters and clinical researchers share their best methods for establishing and maintaining epithelial cell cultures, for analyzing and studying their characteristics, and for using them to set up models of critical biological systems. These readily reproducible techniques describe all the commonly used protocols, as well as those that are more specialized, including several aimed at clinical investigation. The emphasis is on the analysis and assessment of epithelial cells, for example, by looking at apoptosis and integrins or by measuring membrane capacitance and confluence. Also described in step-by-step detail are co-culture techniques valuable in developing models for investigating many different in vitro systems, including the blood-brain barrier, drug uptake, and the interaction of epithelial cells with bacteria. Several protocols cover the culturing of epithelial cells and their use in treating patients with burns and other skin disorders.
Wide-ranging and highly practical, Epithelial Cell Culture Protocols offers both novices and expert investigators alike a step-by-step guide toward a deeper understanding of cellular and molecular mechanisms in general, as well as a set of robust techniques for specifically evaluating the nature and behavior of epithelial cells.