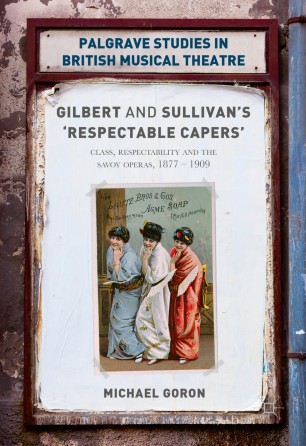 This innovative account of the Gilbert and Sullivan partnership provides a unique insight into the experience of both attending and performing in the original productions of the most influential and enduring pieces of English-language musical theatre.

In the 1870s, Savoy impresario Richard D’Oyly Carte astutely realized that a conscious move to respectability in a West End which, until then, had favored the racy delights of burlesque and French operetta, would attract a new, lucrative morally ‘decent’ audience.

This book examines the commercial, material and human factors underlying the Victorian productions of the Savoy operas. Unusually for a book on ‘G&S’, it focuses on people and things rather than author biography or literary criticism. Examining theatre architecture, interior design, marketing, and typical audiences, as well as the working conditions and personal lives of the members of a Victorian theatre-company, ‘Respectable Capers’ explains how the Gilbert and Sullivan operas helped to transform the West End into the family-friendly ‘theatre land’ which still exists today.

Michael Goron began his working life as a professional actor, working in everything from German Expressionism to traditional pantomime. He formed a small scale touring theatre company for which he directed a number of shows. Michael returned to Higher Education as a post-graduate student and, from 2007, as a lecturer at the universities of Winchester and Southampton Solent, UK.