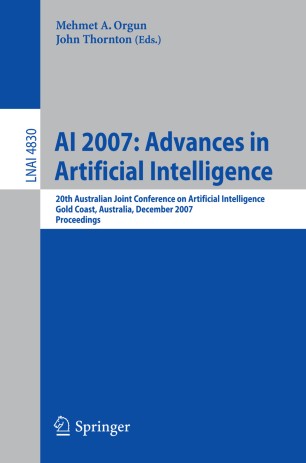 This volume contains the papers presented at AI 2007: The 20th Australian Joint Conference on Arti?cial Intelligence held during December 2–6, 2007 on the Gold Coast, Queensland, Australia. AI 2007 attracted 194 submissions (full papers) from 34 countries. The review process was held in two stages. In the ?rst stage, the submissions were assessed for their relevance and readability by the Senior Program Committee members. Those submissions that passed the ?rst stage were then reviewed by at least three Program Committee members and independent reviewers. After extensive disc- sions, the Committee decided to accept 60 regular papers (acceptance rate of 31%) and 44 short papers (acceptance rate of 22.7%). Two regular papers and four short papers were subsequently withdrawn and are not included in the proceedings. AI 2007 featured invited talks from four internationally distinguished - searchers, namely, Patrick Doherty, Norman Foo, Richard Hartley and Robert Hecht-Nielsen. They shared their insights and work with us and their contri- tions to AI 2007 were greatly appreciated. AI 2007 also featured workshops on integrating AI and data-mining, semantic biomedicine and ontology. The short papers were presented in an interactive poster session and contributed to a st- ulating conference. It was a great pleasure for us to serve as the Program Co-chairs of AI 2007.