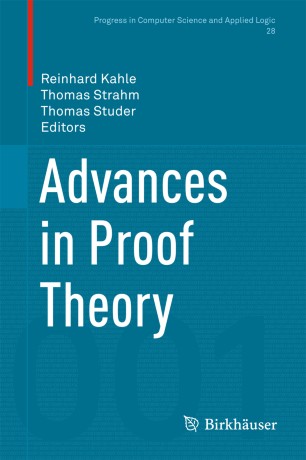 The aim of this volume is to collect original contributions by the best specialists from the area of proof theory, constructivity, and computation and discuss recent trends and results in these areas. Some emphasis will be put on ordinal analysis, reductive proof theory, explicit mathematics and type-theoretic formalisms, and abstract computations. The volume is dedicated to the 60th birthday of Professor Gerhard Jäger, who has been instrumental in shaping and promoting logic in Switzerland for the last 25 years. It comprises contributions from the symposium “Advances in Proof Theory”, which was held in Bern in December 2013.
​Proof theory came into being in the twenties of the last century, when it was inaugurated by David Hilbert in order to secure the foundations of mathematics. It was substantially influenced by Gödel's famous incompleteness theorems of 1930 and Gentzen's new consistency proof for the axiom system of first order number theory in 1936. Today, proof theory is a well-established branch of mathematical and philosophical logic and one of the pillars of the foundations of mathematics. Proof theory explores constructive and computational aspects of mathematical reasoning; it is particularly suitable for dealing with various questions in computer science.