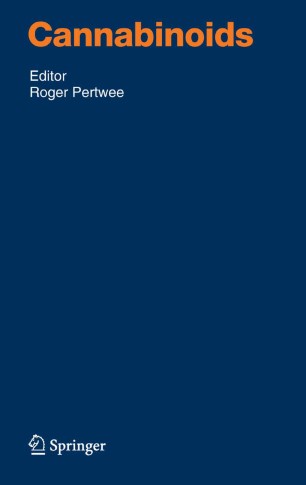 Less than 20 years ago the ?eld of cannabis and the cannabinoids was still c- sidered a minor, somewhat quaint, area of research. A few groups were active in the ?eld, but it was already being viewed as stagnating. The chemistry of cannabis 9 9 was well known, ? -tetrahydrocannabinol (? -THC), identi?ed in 1964, being the only major psychoactive constituent and cannabidiol, which is not psychoactive, possibly contributing to some of the effects. These cannabinoids and several s- thetic analogs had been thoroughly investigated for their pharmacological effects. Their mode of action was considered to be non-speci?c. The reasons for this - sumption were both technical and conceptual. On the technical side, it had been shown that THC was active in both enantiomeric forms (though with a different level of potency) and this observation was incompatible with action on biological substrates—a receptor, an enzyme, an ion channel—which react with a single stereoisomer only. The conceptual problem related to THC activity. This had been pointed out by several highly regarded research groups that had shown that many of the effects seen with cannabinoids were related to those of biologically active lipophiles, and that many of the effects of THC, particularly chronic ones, were comparable to those seen with anaesthetics and solvents.