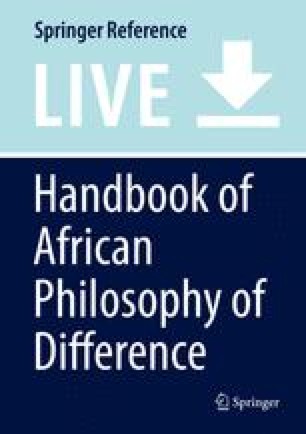 Handbook of African Philosophy of Difference pp 1-13 | Cite as

Language and Othering in African Contexts

Postmodern and post-analytic understanding of African thought was primarily a shift from attempts to understand African thought using Western conceptual lenses to attempt to understand African framework of thought from the conceptual scheme of the people whose thought was being studied. This paradigm shift in the study of a people’s culture championed by such scholars as Ludwig Wittgenstein – notable in his shift from the pictorial theory of language to the game theory – had and continues to have very successful results in the attempts by sociologists, anthropologists, and philosophers to understand African (philosophical) thought. We recall, for instance, the insightful studies of Edward E. Evans-Pritchard, Peter Winch, and Robin Horton and the continuous records by ethnophilosophy. What stands out from this shift to conceptual scheme of a people as a means for unraveling their thought and ideas is the importance of language as a factor that cannot be ignored in understanding various aspects of the being, knowing, and acting of a people. This essay follows in this line of reasoning. It focuses on an underexplored area of the role of language in African thought: how language promotes or impedes positive and negative experiences of othering or alterity in African spaces. It argues that language is imperative to understanding the different levels of othering in African societies. It explores four areas where this is obvious: (1) the lack of competence to speak and communicate in the particular language spoken in the African community in which one dwells naturally in others such as person from the community in a manner that may be inimical to her well-being; (2) the ability to speak in a language of an African people to which one was not naturally born to promote positive relation with the self (the speaker) by the other (the community of selves) to the extent of blurring the gap between the self and the other; (3) the power of language to turn a complete stranger to a close friend when two African strangers meet in a foreign land such as in the Diaspora, a friendship formed solely on the basis of the sameness of language; and (4) the manner in which the other in an African place is conceptually represented to express the people’s understanding of and their responsibility toward the other in such a place. The essay concludes that language remains the richest source to explore and the fastest route to follow in the search for a people’s ideas about othering and difference.