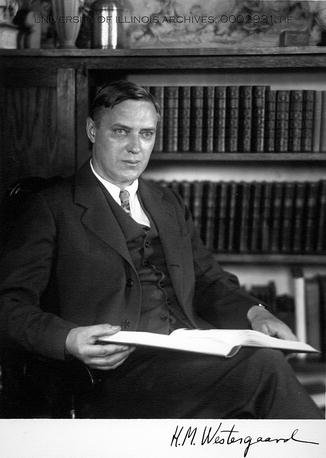 Westergaard studied civil engineering at the Polytechnic in Copenhagen. He graduated in 1911. One of his academic teachers was Asger Skovgaard Ostenfeld who established the strain method in statics allowing the analysis of frameworks.

After graduation he was employed as a civil engineer in Copenhagen, Hamburg, and London. He obtained during this time his knowledge on reinforced concrete structures. After that he entered the University of Göttingen working together with Ludwig Prandtl. He submitted his written dissertation at Königlich Bayerische Technische Hochschule München in 1915 (supervisor August Föppl), but with respect to the World War I (Westergaard moved to the USA), he could pass the oral exam only in 1921. The official graduation certificate he got in 1925 after publication of his thesis.

In the USA he obtained his PhD degree in 1916 at University of Illinois at Urbana-Champaign (thesis title: Tests and Analysis Relating to the Strength and Elasticity of Concrete and Reinforced Concrete Under Bi-axial Stress). After that, in this university he was appointed as a lecturer, from 1921 as an assistant professor, from 1924 as an associate professor, and from 1927 as a professor. In 1936 he was appointed Gordon McKay professor for engineering mechanics at Harvard University. Here he was the dean of the graduate school of engineering from 1937 up to 1946.

His main focus was on concrete structures. In 1930 he published a paper on the history of structural mechanics (Westergaard, 1930). Later his research was directed to fracture mechanics establishing a special solution method based on the Kolosov-Muskhelishvili formulas (Westergaard, 1939).

He was a consultant of the US American Bureau of Reclamation during the Hoover Dam construction. Among his PhD students was Raymond Mindlin.