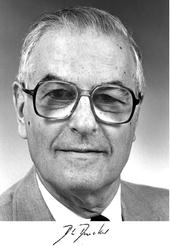 Daniel C. Drucker started his engineering career as a student at Columbia University since his father Moses Abraham Drucker was a civil engineer. His ambition was to design bridges, and he obtained his BSc in civil engineering in 1938. As a student he met Raymond D. Mindlin who was later a founding member and president of the Society for Experimental Stress Analysis (now known as the Society for Experimental Mechanics). Mindlin offered Drucker to prepare a PhD thesis under his supervision. In 1940 he submitted the thesis “Stress analysis by three-dimensional photoelastic methods" and was graduated in mechanical engineering at Columbia University.

Drucker’s main contributions were to theory of plasticity. He suggested the concept of material stability described by stability postulates (named after Drucker, 1959) and together with William Prager a yield criterion (Drucker and Prager, 1952).

Daniel C. Drucker was awarded by Theodore von Kármán Medal (1966), William Prager Medal (1983), Timoshenko Medal (1983), John Fritz Medal (1985), National Medal of Science (1988), ASME Medal (1992), and the first Drucker Medal (1998). He was elected as a member of the Polish Academy of Sciences and the American Academy of Arts and Sciences. He was a Doctor honoris causa of the Brown University, Technion, and University of Illinois.

Twelve years he served as the editor of the Journal of Applied Mechanics (American Society of Mechanical Engineers).