Sir George Gabriel Stokes, 1st Baronet (August 13, 1819, in Skreen, County Sligo, Ireland; February 1, 1901, in Cambridge, England) was a physicist and mathematician with contributions to solid mechanics and physical optics. He popularized the Stokes’ theorem in vector calculus and the theory of asymptotic expansions. 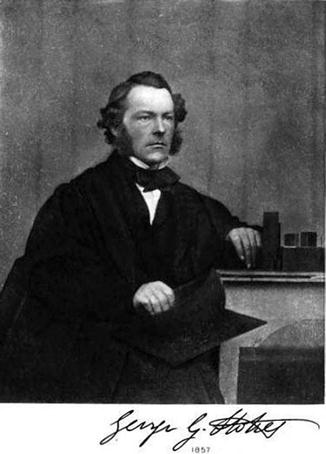 His father, Gabriel Stokes, was a reverend in Skreen (County Sligo) at the west coast of Ireland. His mother, Elizabeth Haughton, was the daughter of a priest. George Gabriel Stokes grew up in a religious surrounding as the youngest of six children. His father was a student of the Trinity College Dublin, and he educated George in Latin. In 1832 he moved to the school of Reverend R.H. Wall in Dublin.

In 1835 he attended the Bristol College in Bristol. Within 2 years Stokes was prepared for a study in Cambridge. The vice-chancellor, Dr. Jerrard, was an Irish, who was in the Cambridge University. Stokes showed his talent in mathematics, and he was awarded finally some prizes in mathematics.

Since 1837 Stokes studied in Pembroke College (University of Cambridge). In second year he was a student of William Hopkins, who prepared the best students for the best in the academic year (Senior Wrangler). In 1841 Stokes was graduated as a Senior Wrangler.

William Hopkins advertised Stokes to make his focus on hydrodynamics (Navier-Stokes equations). At the same time he got information on some papers of George Green. Stokes published in 1842 and 1843 papers on the motion of incompressible fluids. After that he observed that Jean Marie Constant Duhamel (1797–1872) got similar results. The same situation was when he investigated the inner friction in moving fluids. He introduced the proper equations, but similar equations were introduced by Claude Louis Navier (1785–1836), Siméon Denis Poisson (1781–1840), and Adhémar Jean Claude Barré de Saint-Venant (1797–1886). Finally he published his results in the United Kingdom, where the results from the continental Europe in that time where not well known.

The Stoke’s theorem is some generalization of the fundamental theorem of calculus connecting n-dimensional volume integrals with (n − 1)-dimensional surface integrals. The Gauß’ theorem (or Gauß-Ostrogradsky theorem) is a special case.

In 1849 Stokes became the Lucasian Professor of Mathematics. This position was not well paid. So he was employed in addition as a professor of physics at the Government School of Mines in London (established in 1851).

From the Royal Society, of which he became a fellow in 1851, he received the Rumford Medal (1852, contribution to the wavelength of light) and later (1893) the Copley Medal. Since 1854 he was the secretary, and in between 1885 and 1890, he was the president. He was the first after Newton who combined the Lucasian Professor of Mathematics, the president of the Royal Society, and the member of the Parliament of the university. From 1883 to 1885, he was Burnett lecturer at Aberdeen, his lectures on light, which were published in 1884–1887, dealing with its nature, its use as a means of investigation, and its beneficial effects. On April 18, 1888, he was admitted as a Freeman of the City of London. On July 6, 1889, Queen Victoria created him the Baronet Stokes of Lensfield Cottage in the Baronetage of the United Kingdom; the title became extinct in 1916. In 1891, as Gifford lecturer, he published a volume on Natural Theology. He was a member of the Prussian Order Pour le Mérite. His academic distinctions included honorary degrees from many universities, including: The Stokes, a unit of kinematic viscosity, is named after him.