Johann Carl Friedrich Gauß (April 30, 1777, in Brunswick, Principality of Brunswick-Wolfenbüttel; February 23, 1855, in Göttingen, Kingdom of Hanover, German Confederation) was a mathematician and physicist with exceptional influence in many fields of mathematics and science (he is ranked among history’s most influential mathematicians). 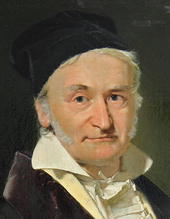 Johann Carl Friedrich Gauß was the only one child of Gebhard Dietrich Gauß (1744–1808) and Dorothea Gauß nee Bentze (1743–1839). He attended the primary school in the age of 7 years. When he was 9 years old, his teacher Büttner formulated the problem to compute the sum of the numbers from 1 to 100. Gauß solved this problem very quick using the following algorithm: the sum is equal to 50 pairs with the sum 101 (1 + 100, 2 + 99, …, 50 + 51) and yields 5050. The teacher understood that Gauß had a great talent in mathematics. Finally, Gauß could attend in 1788 the Katharineum allowing to obtain a higher school degree.

In the age of 14, Gauß first time communicated with the duke Karl Wilhelm Ferdinand von Braunschweig, who supported him financially. With this support Gauß studied from 1792 up to 1795 at Collegium Carolinum. The level of education was in between of high school and university.

In October 1795, Gauß continued his studies at the University of Göttingen. He attended lectures in classical philology and mathematics. In summer term 1796, he attended lectures of experimental physics and later in astronomy. In 1796 he discovered a construction of the heptadecagon on March 30. After that he changed his study program to mathematics. In 1799 he defended his doctoral thesis at the Academia Julia (University of Helmstedt).

Gauß remained mentally active into his old age, even while suffering from gout and general unhappiness. For example, at the age of 62, he taught himself Russian.

Among his contributions to mathematics and science, the following items can be mentioned:

The Gauß (sometimes Gauss), symbol G, sometimes Gs, is in the cgs system of units based on centimeter–gram–second, the unit of measurement of magnetic flux density (or magnetic induction). It was named in honor after Gauß in 1936. One Gauß is defined as one Maxwell per square centimeter. In the International System of Units (SI), which uses the Tesla (symbol T) as the unit of magnetic flux density, one has 1 Gauß = 1 × 10−4 Tesla (or 100 μT) or 1 Tesla = 10,000 Gauß.

From 1989 through 2001, Gauß’ portrait together with the normal distribution curve, and some prominent Göttingen buildings were featured on the German ten-mark banknote.