Handbook of Nanomaterials and Nanocomposites for Energy and Environmental Applications 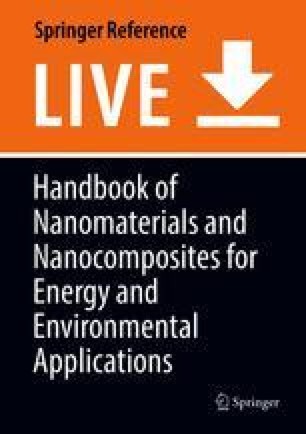 Fabrication of Electrochemical Sensors for the Sensing of Hazardous Compounds

Environmental pollution is a big threat for the world. There are various inorganic/organic pollutants which derailed out from the different industries and have toxic nature. Many compounds such as toluene, hydrazine, nitrite, hydrogen peroxide, resorcinol, 4-chlorophenol, hydroquinone, catechol, phenol, nitro-phenol, and nitrobenzene are widely used in the industries and these compounds are showed hazardous effects on humans, animals, as well as environments. Some of these compounds even in trace amount may harm the human beings. Therefore, the determinations of such compounds are of great importance. Previously various approaches have been made to detect these organic/inorganic compounds. Various research groups have employed different detection techniques which showed good results. Recently, electrochemical approach attracted much attention of the researchers due to its excellent sensitivity, good detection limit, reproducibility, repeatability, simple fabrication procedure, low cost, and high selectivity. In this chapter, fabrication and advantages of electrochemical sensor for the sensing of different analytes have been discussed. Moreover, the role of newly designed and different electrode modifiers for the fabrication of electrochemical sensors has also been discussed.

In present time environmental pollution is a great threat for the whole world [1, 2, 3, 4, 5, 6, 7, 8, 9]. Environmental pollution rapidly increasing, and various factors are responsible for this enhanced environment pollution. There are various organic, inorganic, or other toxic compounds which possess hazardous impact on animals as well as humans and environment [8, 9, 10, 11, 12, 13, 14, 15, 16, 17, 18, 19, 20, 21, 22, 23, 24, 25]. Phenol family is toxic in nature and widely used in various applications. Catechol has been used in chemical, textiles, oil refinements, plastic industries, and agricultural fields [26]. Similarly, hydroquinone which is also isomer of catechol has been applied in various applications such as paints, cosmetics, antioxidants, pesticides, oil industries, photography and pharmaceuticals etc. [26]. There is also another form of phenol derivative known as resorcinol (1,2-benzenediol) has been used in food, dye, and pharmaceutical industries. These phenolic compounds such as catechol and resorcinol have hazardous impact on the environment as well as plants, animals, and human beings. Another form of phenol family is 2-phenylphenol and 4-chlorophenol [1, 5] which also has toxic nature. These phenolic compounds are also used as disinfectant in nursing homes, households, fungicides, food processing plants, hospitals, barbershops, industries, and laundries [5]. These phenolic compounds are also hazardous to the skin, eyes, and responsible for other health issues. Nitrite is another source of nitrogen for green plants and known as intermediate byproduct in the nitrogen cycles. Nitrite is also present in soil, water, and environment. Nitrite is also employed in food industries as preservative. Although nitrite does not cause harmful effects in moderate concentrations but at higher concentrations it may interact with hemoglobin to produce methemoglobin which inhibited the hemoglobin to transport the oxygen throughout the human body and can cause tissue hypoxia [27]. Nitrite may also interact with amide, secondary amines, and tertiary amines to produce nitrosamines which are a carcinogenic compound. Thus, detection of nitrite is important for human as well as environmental concerns. Another compound urea is an organic compound which is used as fertilizer and converted to ammonia and polluted the environment. Urea is also present in protein metabolism and its presence in high concentration in the blood or urine may cause urinary tract obstruction, dehydration, shock, burn, kidney damage, and gastrointestinal bleeding. However, its presence in low concentration may also cause nephritic syndrome, cachexia, and hepatic failure. Urea is also used in milk and its higher concentration in the milk can causes ulcers, indigestion, acidity, etc. Therefore, the detection of urea is important for its use in dairy products, clinical diagnostics, fertilizer plants, or environment monitoring. Hydrazine is also an unstable and highly toxic compound and widely used in rocket fuels, duel cells, chemical reactions, catalyst, and other applications [7]. The long-term contact with hydrazine may have carcinogenic effects due to containing of neurotoxin. Hydrogen peroxide (H2O2) plays crucial role physiological processes. H2O2 is an analyte used in clinics, drugs, chemical, and food industry [4]. H2O2 also has negative impacts on the environments and human beings. So, the detection of H2O2 is also a necessary task. The nitro group containing aromatic compounds such as nitrophenol and picric acid (2,4,6 trinitrophenol) are highly toxic and explosive in nature [15, 17]. Picric acid is used in pharmaceutical, dye, and leather industries [15]. It has toxic nature and has hazardous effects on the environment, plants, and human beings due to its bio-toxicity. Thus, the above-discussed compounds are highly toxic and have hazardous effects. Therefore, the determinations of such compounds are important task. In previous reports, various approaches have been used to the determination of such toxic compounds. The conventional methods such as high-performance liquid chromatography, spectrophotometry, quartz crystal microbalance, spectrofluorometry, surface plasmon resonance, electrophoresis, and flow injection chemiluminescence have been employed for the determination of toxic compounds [9, 28]. In last few years, electrochemical methods have attracted the scientific community for the sensing of toxic and hazardous compounds due to its simple fabrication, cost effectiveness, high sensitivity, selectivity, and repeatability [29, 30, 31]. Hence, in this chapter, we have discussed the recent advances in the sensing of different toxic and hazardous compound employing electrochemical methods.

How to Prepare the Electrochemical Sensors?

There are numerous toxic and hazardous compounds which are harmful to the humans, plants, animals, and environment. Herein, we have summarized the recent advances in the field of electrochemical sensing of different toxic compound using electrochemical methods.

Hydroquinone is another isomer form of catechol and derivative of phenol compound which is also toxic in nature and widely used in cosmetics. The accurate detection is necessary to avoid the carcinogenic effect of the hydroquinone.

Yao et al. prepared a composite of copper nanoparticles (CuNPs)/multi-walled carbon nanotubes (MWCNTs) using microwave method [34]. The confirmation of the formation of the CuNPs/MWCNTs composite was carried out by X-ray diffraction (XRD) and SEM analysis (Fig. 5).
The recorded XRD pattern of the CNT showed the diffraction planes of (002) and (100) while the XRD pattern of the Cu-CNT exhibited the diffraction planes of (002), (111), (200), and (220) which confirmed the formation of CNT and Cu-CNT composite. Further, SEM images were also recorded to observe the morphological features of the CNT and Cu-CNT composite. The electrochemical sensor was prepared using GCE as working electrode. Since, electrochemical impedance spectroscopy (EIS) is an important tool to know the electrochemical activity of the electrode materials. Thus, Nyquist plot of the bare GCE, MWCNTs, and Cu-MWCNTs in 5 mM [Fe(CN)6]3−/4- in 0.1 M KCl were recorded and presented in Fig. 6.
The equivalent circuit for the plotted EIS result has been presented in inset of Fig. 6. The EIS results revealed that Cu-MWCNTs modified electrode has higher electrochemical activity compare to the other two electrodes. This may be due to the synergistic effects between MWCNTs and CuNPs. Furthermore, the chitosan (Chi) was also used in the fabrication of electrodes for the sensing of hydroquinone using cyclic voltammetry. The CV curves of the bare (a) GCE, (b) MWCNTs@Chi/GCE, and (c) Cu-MWCNTs@Chi/GCE in the presence of hydroquinone have been displayed in Fig. 7.

The CV pattern of the bare GCE showed least current whereas Cu-MWCNTs@Chi/GCE exhibited the highest current towards the sensing of hydroquinone using cyclic voltammetry. This higher current activity or electrochemical behavior of the Cu-MWCNTs@Chi/GCE may be due to the synergistic interactions. The lowest detection limit of 0.04 μM was obtained with excellent reproducibility. The prepared Cu-MWCNTs@Chi/GCE was also employed for real sample analysis and obtained results showed satisfactory performance for practical applications.

The obtained results showed increased current response with increasing concentration of hydrazine. The schematic diagram of the developed sensor has been displayed in Fig. 8a while the digital picture of the sensor has been displayed in Fig. 8b. Further CV investigations were carried out in different concentrations of hydrazine in 0.1 M PBS (Fig. 8c). The fabricated sensor showed good electrochemical activity with improved hydrazine detection. The current was enhanced with increased concentration of the hydrazine. The sensitivity and stability of the developed sensor was also improved with the decoration of the PEDOT:PSS by ZnO particles. The layer by layer deposition method was applied for the fabrication of the electrode which was characterized by XRD, SEM, and atomic force microscopy (AFM) techniques. The developed sensor exhibited the lower detection limit of 5 μM with a wide linear range (10 to 500 μM). This printed electrode (sensor) was also applied for real sample analysis using mineral, sea, and tap water for further explore in the practical applications.

Sensing of 2-Phenylphenol and Chlorophenol

In another work, Zhu et al. [37] also demonstrated the role of electrochemical sensor for the detection of 4-chlorophenol. A novel composite was prepared composed of hydroxylated carbon nanotubes (CNTs-OH) decorated with platinum nanoparticles (PtNPs)/rhodamine B (RhB) composite. The schematic illustration for the fabrication of electrode modifier CNTs-OH/PtNP/RhB has been displayed in Scheme 2.
Further the electrochemical sensor with electrode modifier (CNTs-OH/PtNP/RhB) was developed and its electrochemical activity was checked in a redox electrolyte solution (5 mM K3[Fe(CN)6] in 0.1 M KCl). The CV curves of GCE (a), CNTs-OH/GCE (b), CNTs-OH/RhB/GCE (c), CNTs-OH/PtNPs/GCE (d), and CNTs-OH/PtNP/RhB/GCE in 5 mM K3[Fe(CN)6] in 0.1 M KCl at scan rate = 50 mV/s have been shown in Fig. 9.

Nitrite ions NO2− which is also known as preservative are usually used in the drink and food industries. The NO2− may discharge to the environment and has hazardous effects on human health and ecosystem. The detection of NO2− is important and many approaches have been used to detect the NO2− ions. Han et al. prepared a novel composite (rose-like AuNPs/MoS2/graphene) using hydrothermal method [40]. The formation of the rose-like AuNPs/MoS2/graphene composite was checked using XRD, XPS, and TEM measurements. The schematic illustration of the preparation of rose-like AuNPs/MoS2/graphene has been shown in Scheme 4. The TEM results showed that MoS2 possess flower-like surface morphology.
The survey scan XPS spectrum (a), C1s (b), O1s (c), Mo3d (d), S2p (e), and Au4f (f) XPS spectrum of the rose-like AuNPs/MoS2/graphene have been displayed in Fig. 13a–f. The XPS data clearly showed the presence of C1s, O1s, Mo3d, S2p, and Au4f which indicated the formation of AuNPs/MoS2/graphene composite.
Further, the electrodes were prepared using different electrode modifier to investigate the effects of the materials. The CV curves of the bare GCE, GN/GCE, MoS2NF/GCE, and AuNPs/MoS2/GN/GCE in 1 mM NaNO2 in 0.1 M PBS were recorded and the obtained results have been depicted in Fig. 14a.

The observations revealed that bare GCE has poor electrochemical activity while the AuNPs/MoS2/GN/GCE possesses excellent electrochemical activity. The highest current response was obtained for the AuNPs/MoS2/GN/GCE in 1 mM NaNO2 in 0.1 M PBS at pH = 4. Further the effect of different scan rates was also investigated in 1 mM NaNO2 in 0.1 M PBS. The recorded CV graphs have been inserted in Fig. 14b. The obtained results showed that the current enhanced in a linear way with increase in the scan rate. This suggested the diffusion controlled process for the sensing of nitrite. The detection limit of 1 μM was obtained with wide linear range using AuNPs/MoS2/GN/GCE. The obtained detection limit for the sensing of nitrite was quite interesting and showed the potential use of AuNPs/MoS2/GN/GCE as a suitable electrode material for electrochemical sensing applications.

There are so many toxic and hazardous compounds which are frequently used in various industries, cosmetics, and also used as preservatives. These compounds like catechol, hydroquinone, hydrazine, hydrogen peroxide, nitrite, chlorophenol etc. has negative impacts on the human beings and environment including animals and plants. There were conventional approaches to detect these toxic compounds but electrochemical has shown excellent performance with good detection limit and sensitivity. However, there are few challenges for the electrochemical approaches for the sensing of such hazardous compounds. Since the performance of the electrochemical detecting devices depends on the working substrate and electrode modifier, a highly efficient sensor needs to be developed.

Cite this entry as:
Ahmad K., Raza W. (2020) Fabrication of Electrochemical Sensors for the Sensing of Hazardous Compounds. In: Kharissova O., Martínez L., Kharisov B. (eds) Handbook of Nanomaterials and Nanocomposites for Energy and Environmental Applications. Springer, Cham