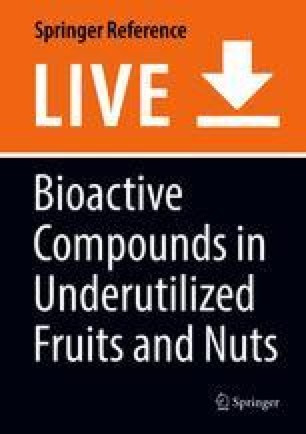 Pili (Canarium ovatum) is a tropical tree that is indigenous to the Philippines where its center of genetic diversity is located in the Bicol Region. As a nut, Canarium ovatum is considered the priced commodity, and it is often used in the confectionery industry. The pulp, which is totally discarded as waste, contains considerable quantities of bioactive compounds present in the pulp meal as well as in the oil. This chapter describes the characterization of all the parts of Canarium ovatum fruit as source of hydrophilic and lipophilic bioactive compounds with high antioxidant functionality. The exploitation of this underutilized fruit presents a great potential source of phytochemicals with antioxidants functionalities.

Pili (Canarium ovatum), a tropical tree that is indigenous to the Philippines, is said to be the second most important oilseed of commercial value (Fig. 1). The Canarium ovatum fruit is mainly used to manufacture candies and confectioneries where the pulp, which is 50% of the total fruit, is totally discarded as waste. However, the pulp contains considerable amounts of oil and source of bioactive compounds that could be utilized for high-value product development.

Studies revealed that Canarium ovatum fruits are rich in bioactive compounds that are good for the health. Studies indicated that the pulp contains a high source of hydrophilic phytochemicals such as polyphenols. The oil also contains high levels of lipophilic molecular species such as tocopherols, phytosterols, and carotenoids with high antioxidant properties.

Canarium sp. belongs to the family Burseraceae which consist of 16 genera with more than 500 species across the tropical hemisphere and is indigenous to the Philippines [1, 2]. Bicolanos dubbed pili as the “tree of hope” owing to its many uses in which almost the entire tree parts can be exploited as a new source of income for various food, medicine, and industrial applicability. In a report issued by the Department of Agriculture Regional Field Office 5 (DA-RFO 5) [3], Canarium ovatum, being one of the banner commodities of the Bicol Region, solidifies its position as a profitable commodity that Bicolanos can truly benefit from.

Canarium sp. is a fairly big tree that reaches a height of about 20–30 m and a trunk of about 40 cm. It is one of the most resistant species to strong winds and typhoons which make it a good living windbreak for other crops such as papaya and banana. Its wood may be used for house-framing or as materials for boxes, crates, and musical instruments. The trunk of C. luzonicum is commonly tapped for its resin which is being exported as Manila elemi which is commonly used as ingredient in the cosmetic and pharmaceutical industries (Fig. 2).
The fruit of Canarium sp. has three general parts: the pulp, the shell, and the kernel (Fig. 3). The pulp is composed of a thin skin (exocarp) which is smooth and shiny, and turns from green to dark purple to almost black upon ripening, and a fibrous thick flesh (mesocarp) that surrounds shelled, edible nut. It contains appreciable amounts of oil and protein which can be used for sardine manufacture, salad dressing, and other food preparations [4]. Moreover, previous studies explored the possibility of using the pulp as source of dietary fiber and as feed ingredient for animals [5, 6].

Being thick due to its hypodermal cells, the shell (endocarp) is commonly used in making native crafts or as a growing medium for orchids and anthuriums. It is also popular for its good charcoal characteristics and can be used as fuel. When processed into activated carbon, it can be used for water purification and as deodorizing, decolorizing, and filtering agents.

The kernel is made up of a brown, papery seed coat (testa) surrounding the embryo which has two white cotyledons [1]. The kernel is the high-priced commodity which is processed mostly for confectioneries. In some parts of the country, the roasted kernels are used in chocolate-making. It is also rich in oil and protein which is suitable for culinary purposes [4].

There are several studies supported that Canarium ovatum contains health-promoting compounds found in almost all parts of its fruit. Its exocarp or the skin, being highly pigmented, contains high levels of anthocyanin with about 23 mg cyanidin-3-glucoside equivalent g−1 skin dry weight (Fig. 4). Anthocyanins are flavonoids responsible for the natural pigmentation of most fruits (Fig. 5). Cyanidin, delphinidin, petunidin, peonidin, pelargonidin, and malvidin are the most anthocyanins present in fruit exocarps that are of dietary importance (Table 1) [7].
Table 1

The crude skin extract of Canarium ovatum exhibited potential antioxidant activities against DPPH radical with scavenging activity of 89.20% at 1 mg mL−1 (EC50 of 71 μg mL−1) that is comparable to ascorbic acid (EC50 of 66 μg mL−1). Aril-dela Cruz et al. [8] reported that Canarium ovatum exocarp extract can be a source of functional food colorant with purplish-pink color that can be incorporated in yogurt products with added antioxidant activities.

Arenas and Trinidad [14] traced the fate of polyphenols present in Canarium ovatum pomace after an in vitro digestibility assay. The simulated digestion of the pomace revealed the changes and bioavailability of polyphenols as it goes through the human intestinal tract. According to the study, condensed tannins and anthocyanins present in Canarium ovatum pomace were released in the gastric and intestinal stages, whereas total phenolics and flavonoids were released after fermentation in the colon. There are studies however that only 10% of the total polyphenols are absorbed in the small intestine. Bulk of these polyphenols are catabolized in the large intestine through bacterial action, and these catabolites are said to be the contributors of the health-promoting effects of polyphenols [15].

Aside from the ethanolic extracts of Canarium ovatum fruit, the oil also contains significant levels of lipophilic bioactive compounds with antioxidant activities [4]. Canarium ovatum contains around 20–28% and 60–75% oil content in the pulp and kernel (Fig. 7). The fatty acid profile of the pulp resembles that of olive oil with oleic acid as the major fatty acid. Interestingly, the oil contains high unsaponifiable matter of around 550–1690 mg 100 g−1 oil which are mostly carotenoids, phytosterols, and tocopherols though they are not polyphenolic in nature.
The oils obtained from Canarium ovatum pulp and kernel contain high tocopherol content of 92.49 and 35.15 mg 100 g−1 oil, respectively. Tocopherols (vitamin E) belong to the class of lipophilic methylated phenolic compounds with antioxidant activities against lipid autoxidation. Tocopherols exist in four homologues, α-, β-, γ-, and δ-tocopherol, which differ in the number and position of methyl groups in the aromatic ring (Fig. 8).
Alpha-tocopherol is the most common homologue and present in significant amounts in almond, peanut, olive, and sunflower oils [16, 17, 18]. Some edible oils such as canola, corn, camelina, and soybean oils have higher γ-tocopherol content than its α-homologue [16]. In contrast, Canarium ovatum oil contains 65–80% δ-tocopherol (Table 2). In an in vivo system, the relative antioxidant activity of the four tocopherol homologues generally follows the order: α > β > γ > δ [19]. And there are studies that suggest that in in vitro experiments and in dietary lipids, either γ- and δ-tocopherol showed higher antioxidant activities [20, 21]. Suárez-Jiménez et al. [22] showed that the α-tocopherol effectively inhibited lipid oxidation at low temperature and low concentrations (50–100 ppm). However, Bruscatto et al. [23] reported that the γ- and δ-tocopherols are more potent antioxidants against lipid autoxidation at elevated temperatures.
Table 2

Canarium ovatum oil contains high carotenoid content which are mostly α- and β-carotenes (Table 3). The presence of these conjugated double bonds in Canarium ovatum oil is crucial for proper functioning which is suggested to participate in many lipid oxidative processes. Studies revealed that β-carotene and lycopene are potent singlet oxygen quenchers as compared to other lipophilic antioxidants such as tocopherol and ascorbic acid [24] (Fig. 9).
Table 3

Majority of the unsaponifiable matters present in Canarium ovatum oil is phytosterols (Fig. 10) which are mostly of stigmasterol and campesterol (186 and 485 mg 100 g−1pulp oil, respectively). In kernel oil, 80% of the phytosterols are stigmasterol (Table 4).
Table 4

Canarium ovatum contains considerable quantities of bioactive compounds with antioxidant properties which are distributed in its fruit parts – the pulp, skin, and kernel. The ethanolic extract of the skin showed high anthocyanin content as evident by its purple to magenta in color. The defatted pulp and kernel showed high levels of total phenolics and condensed tannins with high antioxidant activities against DPPH radicals.

The pulp and kernel contains 20–28% and 60–75% oil with notable presence of unsaponifiable matter consisting of mostly carotenoids, tocopherols, and phytosterols. Most of the tocopherols present in the pulp and kernel oils are δ-tocopherol. Fractionation of the carotenoids revealed high levels of β-carotene, while stigmasterol and campesterol are the dominant phytosterols present in both oils. Studies strongly suggest that these lipophilic bioactive compounds have high antioxidant functionalities in retarding lipid peroxidation in either in vitro or in vivo systems.

Canarium ovatum, being an indigenous tropical tree in the Philippines, can be a source of bioactive compounds with antioxidant activities having high potential for high-value product development. This holds the promise of the beneficial effects of Canarium ovatum as a sustainable source of income for many farmers.

The authors would like to thank the Oils and Fats Laboratory, National Institute of Molecular Biology and Biotechnology (BIOTECH), University of the Philippines Los Baños, College, Laguna.