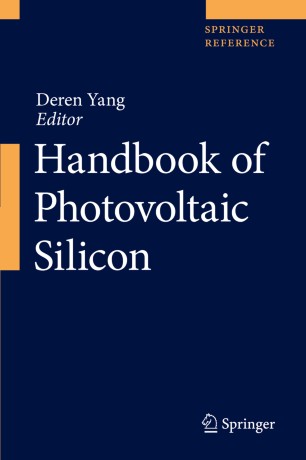 The utilization of sun light is one of the hottest topics in sustainable energy research. To efficiently convert sun power into a reliable energy – electricity – for consumption and storage, silicon and its derivatives have been widely studied and applied in solar cell systems. This handbook covers the photovoltaics of silicon materials and devices, providing a comprehensive summary of the state of the art of photovoltaic silicon sciences and technologies.
This work is divided into various areas including but not limited to fundamental principles, design methodologies, wafering techniques/fabrications, characterizations, applications, current research trends and challenges.
It offers the most updated and self-explanatory reference to all levels of students and acts as a quick reference to the experts from the fields of chemistry, material science, physics, chemical engineering, electrical engineering, solar energy, etc..

Prof. Dr. Deren Yang was born in 1964 in China. He is an academician of the Chinese Academy of Sciences and a Cheung Kong Professor at Zhejiang University in China. He is the dean of Faculty of Engineering at Zhejiang University. He is also the director of the State Key Lab of Silicon Materials and the director of Semiconductor Materials Institute at Zhejiang University. Dr. Yang received his bachelor’s degree in 1985 and his Ph.D. in 1991 from Zhejiang University and then worked there. He worked as a visiting researcher in Japan in 1993, in Germany from 1995 to 1997, and in Sweden in 1999. In 1997, he was promoted to be a full professor by Zhejiang University and then promoted to be the Cheung Kong Professor in 2000 by the Ministry of Education of China. Dr. Yang received the National Science Fund for Distinguished Young Scholars in China in 2002, won the Award of National Nature Science in 2005 and 2013, as well as the Award of Chinese Young Science and Technology in 2006. He got elected as an academician of the Chinese Academy of Sciences in 2017.