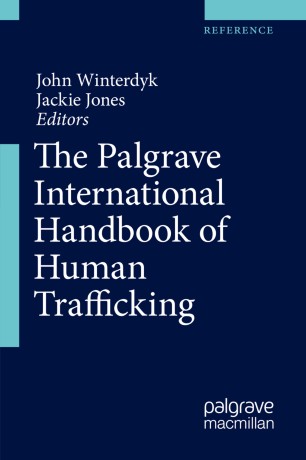 This handbook is an international, comprehensive, reference tool in the field of trafficking in people and slavery. It covers everything from historical perspectives to cutting-edge topics to provide a high-level and systematic examination of the field which is at the forefront of both research and practice. It has an impressive breadth of entries from leading experts and international organisations to NGOs on the ground. This handbook is truly global with contributions from scholars and practitioners on virtually every continent (e.g. Europe, North America, Australia, Africa, Asia, and South America). This book also covers problematic areas that cannot be found in other reference works.

The Palgrave International Handbook of Human Trafficking is divided into eight key sections:

1. History of Slavery and Trafficking in Persons

2. Explanations and Methods of Inquiry

3. Types of Trafficking in Persons

4. Trafficking in Persons and Response Mechanisms

7. The work of Non-Governmental Organizations

8. Future Issues and Directions in Controlling Trafficking in Persons.

John Winterdyk is Professor of Criminology at Mount Royal University, Calgary. He has been engaged in research and writing on the subject of human trafficking since approximately 2004. In addition to being lead co-editor (with B. Perrin and P. Reichel) of the book Human Trafficking: Exploring the International Nature, Concerns, and Complexities (CRC Press, 2012), he also co-edited a special issue on human trafficking for the European Criminology Journal (2010), which was, as of 2015, the most widely accessed issue in the history of the journal. John has also co-authored several related journal articles. In 2019, he served as a guest editor for special issues on human trafficking for the Canadian “Justice Report.” Currently, he serves as the book review editor for the Journal of Human Trafficking and was a Director of ACT (Action Coalition on Human Trafficking). In April 2016, John co-facilitated (with Professor Jackie Jones – Bristol University) an international workshop on child trafficking at the Oñati International Institute for the Sociology of Law in Spain and produced a number of entries for different publications. Along with Jackie Jones, he also edited Human Trafficking: Opportunities and Challenges in the 21st Century (Lambert Academic Publishing, 2018). John has also presented on the topic at numerous international conferences over the past 12 years and in 2018 conducted a week long workshop on human trafficking in India after being awarded a GIAN grant.

Jackie Jones is a Member of the European Parliament for Wales (MEP) and former Professor of Feminist Legal Studies at the University of the West of England, Bristol. Until her election in May 2019, she had been researching and writing about human rights and equalities, especially women’s rights, since the late 1990s. Latterly, she focused on ending violence against women and girls. She has written several pieces about human trafficking and helped progress laws and policies in Wales on human trafficking. She was an activist until her election, attending/presenting at the United Nations Commission on the Status of Women each year, bringing students to present and gain experience as well as to meet international NGO delegates working in the sector. She was President of European Women Lawyers Association and visiting scholar at universities in Germany and France. She has given evidence in Westminster and Wales to government and has often been invited as expert to UK government, European Commission, and European Institute for Gender Equality meetings regarding equality and ending violence against women and girls. As MEP she sits on the Women’s Rights and Equality and Legal Affairs Committees of the European Parliament.

“Palgrave International Handbook of Human Trafficking … is a timely and significant project. … This two-volume collection should serve as an invaluable resource for scholars as well as be considered by any post-secondary school’s library acquisition.” (Saleh Shahriar, Journal of Human Trafficking, March 16, 2020)