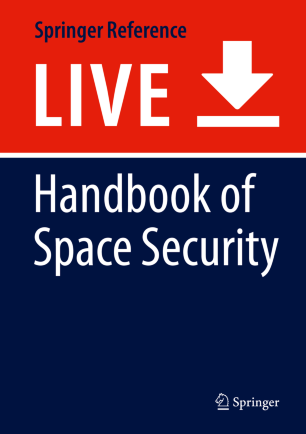 Space Security involves the use of space (in particular communication, navigation, earth observation, and electronic intelligence satellites) for military and security purposes on earth and also the maintenance of space (in particular the earth orbits) as safe and secure areas for conducting peaceful activities. The two aspects can be summarized as "space for security on earth" and “the safeguarding of space for peaceful endeavors.”
The second, updated edition of this handbook provides a sophisticated, cutting-edge resource on the space security portfolio and the associated technology, applications and programs to help fellow members of the global space community and other interested policy-making and academic audiences keep abreast of the current and future directions of this vital dimension of international space policy. Various dimensions of space security as well as space for security on Earth are described, covering space policy and the geopolitics of space, existing and planned applications and programs, as well as technological solutions.
This second edition covers the recent space and security developments that have taken place in Europe and worldwide over the last years, along with new challenges that must be addressed. At its conclusion, the book provides foreward-looking recommendations, especially in the area of space governance and transparency and confidence-building measures.

Prof. Dr. Kai-Uwe Schrogl is the Chief Strategy Officer heading the Strategy Department of the European Space Agency (ESA, Headquarters in Paris, France). From 2007 to 2011, he was the Director of the European Space Policy Institute (ESPI) in Vienna, Austria, the leading European think tank for space policy. Prior to this, he was the Head of the Corporate Development and External Relations Department in the German Aerospace Center (DLR) in Cologne, Germany.
Previously, Schrogl worked with the German Ministry for Post and Telecommunications and the German Space Agency (DARA). He has been a delegate to numerous international forums and served from 2014 to 2016 as chairman of the Legal Subcommittee of the United Nations Committee on the Peaceful Uses of Outer Space, the highest body for space lawmaking, comprising 73 Member States. He also was chairman of various European and global committees (ESA International Relations Committee and two plenary working groups of the UNCOPUOS Legal Subcommittee, the one on the launching State and the other on the registration practice, both leading to UN General Assembly Resolutions). He presented and respectively testified at hearings of the European Parliament and the U.S. House of Representatives.
Schrogl has written or coedited 15 books and more than 130 articles, reports and papers in the fields of space policy and law as well as telecommunications policy. He launched and edited  the “Yearbook on Space Policy” and the book series “Studies in Space Policy” until 2011, both published by ESPI at SpringerWienNewYork. He sits on editorial boards of various international journals in the field of space policy and law (Space Policy, Zeitschrift für Luft- und Weltraumrecht, Studies in Space Law/Nijhoff; previously also Acta Astronautica).
Schrogl is Vice President of the International Institute of Space Law, Member of the International Academy of Astronautics (recently chairing its Commission on policy, economics and regulations) and the Russian Academy for Cosmonautics as well as Corresponding Member of the French Air and Space Academy. He holds a doctorate degree in political science and lectures international relations as an Honorary Professor at Tübingen University, Germany.