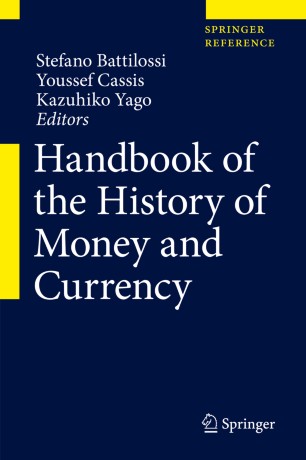 Handbook of the History of Money and Currency

This handbook provides a comprehensive overview of state-of-the-art research in the field of monetary and financial history. The authors comprise different generations of leading scholars from universities worldwide. Thanks to its unrivaled breadth both in time (from antiquity to the present) and geographical coverage (from Europe to the Americas and Asia), the volume is set to become a key reference for historians, economists, and social scientists with an interest in the subject. The handbook reflects the existing variety of scholarly approaches in the field, from theoretically driven macroeconomic history to the political economy of monetary institutions and the historical evolution of monetary policies. Its thematic sections cover a wide range of topics, including the historical origins of money; money, coinage, and the state; trade, money markets, and international currencies; money and metals; monetary experiments; Asian monetary systems; exchange rate regimes; monetary integration; central banking and monetary policy; and aggregate price shocks.

Stefano Battilossi is Associate Professor of Economic History at the Department of Social Sciences, Universidad Carlos III de Madrid. His research interests include international banking, financial regulation, macroeconomic policies, and stock markets in historical perspective, with a special focus on Western Europe in the 19th and 20th centuries. He has published articles in The Economic History Review, the European Review of Economic History, and Cliometrica, and contributed chapters to the Cambridge Economic History of Modern Europe (with James Foreman-Peck) (Cambridge University Press, 2010), The Oxford Handbook of the Italian Economy Since Unification (Oxford University Press, 2013), and The Oxford Handbook of Banking and Financial History (Oxford University Press, 2016). He has edited European Banks and the American Challenge: Competition and Co-operation in International Banking under Bretton Woods, with Youssef Cassis (Oxford University Press, 2002) and State and Financial Systems in Europe and the USA: Historical Perspectives on Regulation and Supervision in the 19th and 20th centuries, with Jaime Reis (Ashgate, 2010). He has been an editor of the Financial History Review (Cambridge Journals) since 2010. He served as a member of the Board of Trustees of the European Historical Economics Society (2006–2014), and sits in the Academic Advisory Council of the European Association for Banking and Financial History (Frankfurt a.M.).

Kazuhiko Yago is Professor of Economic History at the School of Commerce, Waseda University, Tokyo. He obtained a docteur en histoire de l’Université Paris X-Nanterre in 1996. His recent publications include “A Crisis Manager for the International Monetary and Financial System? The Rise and Fall of the OECD Working Party 3, 1961–1980” in The OECD and the International Political Economy Since 1948 (Palgrave, 2017; Matthieu Leimgruber and Matthias Schmelzer, eds.); as an editor, with Hubert Bonin and Nuno Valério, of Asian Imperial Banking History (Taylor and Francis, 2015); and as the author of The Financial History of the Bank for International Settlements (Routledge, 2012).

“There is much material in the book that will be valuable to researchers in the history of money and currency. … These are highly recommended for all libraries and for researchers and policy-makers.” (Ronnie J. Phillips, Business Economics, March 9, 2020)