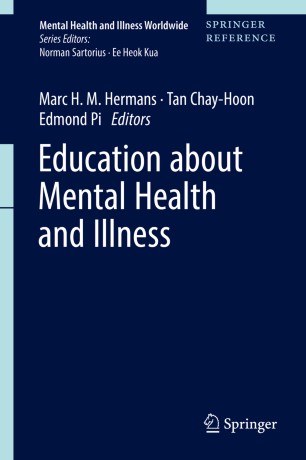 Education about Mental Health and Illness

This book highlights the best educational practices for the professionals dealing with mental health and illness. While attempting an overall review of the current state-of-the-art in psychiatry education, the book focuses on recent developments and controversies in undergraduate and postgraduate psychiatric education around the globe.

Marc H. M. Hermans graduated from medical school at Katholieke Universiteit Leuven (KU Leuven – Belgium). He went into general practice for about 10 years (1979–1990). He started his psychiatric training at the University Psychiatric Centre (Kortenberg, Belgium), and after 1 year neurology training in the general medical hospital, Imelda (Bonheiden, Belgium), he finished his training at the residential adolescent psychotherapy center, De Viersprong (Halsteren, the Netherlands). He became accredited psychiatrist in 1995 and accredited child and adolescent psychiatrist in 2006. He started his career in the Community Mental Health Care Center in Mechelen next to a private solo practice in Mechelen. He later initiated a group practice in Sint-Niklaas (Belgium), now working together with two other child and adolescent psychiatrists and five child psychologists-psychotherapists. He is a certified family and system therapist and certified psychoanalytic psychotherapist. He took supplementary training in group therapy, transactional analysis, and hypnotherapy. He is founding member of the Belgian Professional Union of Medical Specialists in Psychiatry and of the Flemish Association of Psychiatry. He has been board member of the Flemish Association of Psychiatrists-Psychotherapists; the Flemish Association of Neurologists, Psychiatrists and Neurosurgeons; and the Flemish Association for Psychoanalytic Psychotherapy. He is founding and board member of RINO Vlaanderen, a foundation offering postgraduate training on child and adolescent psychodynamically inspired psychotherapy. He recently became a member of the board of the Flemish Association for Child and Adolescent Psychiatry. He is immediate past president of the UEMS Section of Psychiatry and vice president of the Union Européenne de Médecins Spécialistes. He was involved in numerous educational activities in Belgium and on an international level as member of the Committee on Education within the European Psychiatric Association and the Operational Committee on Education of the World Psychiatric Association. His main fields of interest as reflected in publications and lectures at congresses are promoting high standards for psychiatric training and practice and psychotherapeutic approaches in psychiatric practice.

Dr. Tan Chay-Hoon, President elect and council member of Asian College of Neuropsychopharmacology (AsCNP), is a visiting consultant psychiatrist at the National University Hospital as well as Associate Professor at the Department of Pharmacology, National University of Singapore. Dr. Tan was trained as psychiatrist in Singapore. Subsequently she received multiple fellowships that enabled her to acquire expertise in neuropsychopharmacology at Kansai University, Osaka; University Health-Science Center, University of Texas; Massachusetts General Hospital; and Harvard Medical School. She conducted research on signal transduction and psychotropic medication in subjects with psychiatric disorders and was awarded a Ph.D. in Pharmacology. She is one of the founding coordinators of the REsearch in Asian Psychotropic Prescription (www. reap.asia) since 1999, mentoring psychiatrists and contributing to the prescribing practice of psychotropic drugs in Asia. She is also member of World Psychiatric Association, Section on Urban Mental Health. Dr. Tan is passionately known for her contribution to medical education. In addition to being an “Excellent Teacher,” she conducts medical education workshops both locally and internationally and has mentored numerous health professionals. She has received multiple University Excellent Teaching Awards from 2002 to 2017 and has been named the National University of Singapore Faculty Outstanding Educator in 2016.

Edmond Pi M. D. is Professor Emeritus of Clinical Psychiatry and the Behavioral Sciences at the University of Southern California (USC) Keck School of Medicine, Los Angeles, California, USA. Professor Pi previously served as Executive Vice Chair, Associate Chair for Clinical Affairs, and Director of Residency Training Program of the Department of Psychiatry at different medical schools in the USA. He is a Clinical Professor of Psychiatry at the University of California Los Angeles (UCLA) David Geffen School of Medicine. Dr. Pi is certified in the specialty of Psychiatry and the subspecialty of Psychosomatic Medicine. Dr. Pi is former Medical Director of the Department of Mental Health (DMH), State of California. He was the department’s highest-level psychiatrist and was responsible for ensuring the development and implementation of statewide mental health treatment services. Professor Pi has been consistently acknowledged as a valued educator and received many outstanding teacher awards for his excellent teaching and clinical supervision. He is an accomplished researcher in the fields of cross-cultural psychiatry and psychopharmacology with more than 150 publications including authorship in psychiatric textbooks. Professor Pi has been very active on both the national and international mental health scenes in the past 40 years, including President of the Association of Chinese American Psychiatrists, Vice President and Treasurer of the Pacific Rim College of Psychiatrists, Chairperson of the Committee of Asian American Psychiatrists, Chair and Vice Chair of seven Minority and Underrepresented (M/UR) Groups, and Member of the Assembly Executive Committee of the American Psychiatric Association (APA). He is a Distinguished Life Fellow of APA; International Associate Member of the Royal College of Psychiatrists, UK; and Honorary Fellow ofWorld Psychiatric Association (WPA). Currently, Professor Pi serves as the Representative for Zone 2 (USA) within the WPA Board. Among his many honors, he is the recipient of the 2009 Asian American (Kun-po Soo) Award of the APA for his significant contributions toward understanding the impact and import of Asian cultural heritage in areas which have relevance to psychiatry. Dr. Pi is listed among the Best Doctors in America and America’s Top Doctors.