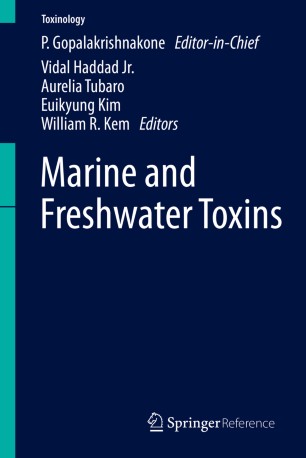 This book presents the structure of the main toxins of aquatic origin, their distribution, producing species and vectors, their mechanisms of action, the clinical aspects of envenomation in humans, their effects in laboratory or wild animals, their toxicokinetic properties, including the relevant treatment, detection methods and regulatory aspects for management. The work also presents the main species associated with the injuries, poisonings their toxins, mechanism of action and the clinical aspects of the envenomations by aquatic animals and discusses the actual measures utilized in the first aid and hospital treatments. Marine toxins such as palytoxins, brevetoxins, saxitoxin, ciguatoxins, okadaic acid, azaspiracid toxins, equinatoxins are also dealt with in this volume. These toxins can be lethal as well as having a complex and large molecular structure and display mechanisms by which they act very specifically on targets, receptors or on critical body proteins.

The marine and freshwater environments are the new frontiers of humanity, but the increase of economic and tourist activities provoke nasty encounters between aquatic animals and humans. The main victims are swimmers, professional and sportive fishermen, surfers and scuba divers as well as people working in related fields. The identification, knowledge and treatment of envenomations caused by venomous and poisonous animals are not adequate and the prevention of injuries still is not possible. Additionally, the immense potential of the pharmacologic effects of their toxins is not fully explored. Toxins of venomous aquatic animals can cause proteolysis, myotoxicity, hemotoxicity (mainly hemolysis), cytotoxicity and neurotoxicity. The neurotoxicity is generally associated with toxins of dinoflagellates and cyanobacteria, present in poisonous and/or contaminated invertebrates and fish.

Prof. P. Gopalakrishnakone, M.B.B.S., Ph.D., F.A.M.S., D.Sc., is presently professor of anatomy and chairman of the Venom and Toxin Research Programme at Yong Loo Lin School of Medicine, National University of Singapore. He is also a consultant to the Defence Science Organization in Singapore and adjunct senior research scientist at the Defence Medical Research Institute. Prof. Gopalakrishnakone is an honorary principal fellow at the Australian Venom Research Unit, University of Melbourne, Australia. His research studies include structure function studies, toxin detection, biosensors, antitoxins and neutralization factors, toxicogenomics and expression studies, antimicrobial peptides from venoms and toxins, and PLA2 inhibitors as potential drug candidates for inflammatory diseases. The techniques he employs include quantum dots to toxinology, computational biology, microarrays, and protein chips. Prof. Gopalakrishnakone has more than 160 international publications, four books, about 350 conference presentations, and 10 patent applications. He has been an active member of the International Society on Toxinology (IST) for 30 years and was president from 2008 to 2012. He is also the founder president of its Asia Pacific Section, a council member, as well as an editorial board member of Toxicon, the society’s official journal. His research awards include the Outstanding University Researcher Award from the National University of Singapore

Prof. Vidal Haddad Junior holds a degree in human medicine at the Federal University of Rio de Janeiro (1983) and an incomplete course of biological sciences from the São Paulo State University (UNESP), both in Brazil. He holds an M.Sc. in Medicine (Dermatology) at the Federal University of São Paulo (1991) and Ph.D. in Medicine (Dermatology) at the Federal University of São Paulo (1999). He is currently associate professor (full professor) at the Botucatu Medical School, São Paulo State University, serving as head of the Department of Dermatology and Radiotherapy. He previously served as a professor at the Post-Graduation in Zoology in the Biosciences Institute – São Paulo State University and was collaborator physician in the Vital Brazil Hospital - Butantan Institute, São Paulo State. He is currently Professor in the Post-Graduation in the Public Health Department of Botucatu Medical School (UNESP) and in the Post-Graduation in Wildlife of the Faculty of Veterinary Medicine and Animal Science, Botucatu Program (UNESP). He belongs to the Deliberative Council of the Brazilian Society of Toxicology at the Deliberative Council, National Editorial Council, and is President of the Scientific Committee of the Brazilian Society of Dermatology. He acts as a consultant for the Brazilian Ministry of Health, National Foundation of Health and Department of Health of São Paulo State Hospital (injuries for aquatic venomous animals). He has published eight books and 152 scientific papers based on experience in human medicine and biological sciences with an emphasis in dermatology and applied zoology, acting on the following subjects: marine and freshwater venomous, poisonous and traumatic animals, composition and fractionation of venoms, clinical and therapeutic aspects of the envenomations, cutaneous leishmaniasis, severe acne, and public health fishing communities.

(Elsevier) since 2010; and a member of the Board of the International Society for the Study of Harmful Algae (ISSHA) since 2012. She teaches the courses of  “Toxicology of Natural Substances”, “Algal Toxins Poisonings” and “Marine Toxicology” at the University of Trieste. Her research work is focused on the toxicological characterization of marine algal toxins and on the development of new methods for toxins detection.

Prof. Euikyung Kim is a professor of pharmacology and toxicology major at School of Veterinary Medicine in Gyeongsang National University (GNU). He was born in Seoul, South Korea, and graduated Seoul National University in 1984 with a degree of Doctor of Veterinary Medicine (D.V.M). He then went to USA in 1988 for his Ph.D. degree from University of California at Davis, where he studied ryanodine receptor calcium release channel of cardiac sarcoplasmic reticulum with Dr. Isaac N. Pessah and Dr. Shri N. Giri as research advisors. For his postdoctoral training at the Department of Pathology in Yale Medical School, he worked together with Dr. Stephen L. Warren for RNA polymerase II and mammalian cell transcription-splicing. In 1996, he returned to Korea to join CJ CheilJedang R&D Center as a senior researcher in pharmacology department for the development of chemical synthesis-based drug discovery. A full operation of his toxinology studies has virtually begun from 2004 at Gyeongsang National University (GNU), especially on jellyfish venoms obtained from Korean oceans. He visited Dr. Wayne C. Hodgson in Monash University, Australia, in his early stage of the study. In toxinology field, he almost for the first time ventured the researches on scyphozoan jellyfish venoms and their toxins. He is well-known as an expert for jellyfish venom in Korea and developed region-specific first aid strategy for the stings of various kinds of jellyfish venoms. He is also an organizer of the section of ‘Jellyfish Venoms and Their Uses’ in annual meetings of Korea-China-Japan International Jellyfish Workshop.

Dr. William R. Kem earned his B.S. degree in biology at Swarthmore College, his M.S. and Ph.D. degrees in physiology at the University of Illinois at Champaign-Urbana and then did postdoctoral research with Dr. Toshio Narahashi at Duke Medical Center in the Department of Physiology and Pharmacology. In 1971 he joined the faculty of the University of Florida in Gainesville, where he is currently professor of pharmacology and therapeutics in the College of Medicine. The Kem laboratory uses natural toxins as “lead” compounds for the design of drugs targeting ion channels and their associated receptors. Organic synthesis and semi-synthesis approaches are then used to obtain a variety of toxin analogs suitable for structure activity studies. Several drug candidates targeting certain brain nicotinic receptors are being developed. GTS-21 (also called DMXBA) is an alpha7 nicotinic receptor agonist that is currently in clinical tests for improving cognition in neurodegenerative diseases and reducing inflammation in rheumatoid arthritis.  GTS-21 is a synthetic derivative of anabaseine, a marine worm alkaloid. Kem has also investigated a variety of large pore-forming, peptide toxins as well as smaller peptides like the sea anemone Stichodactyla K channel toxin (ShK), which potently blocks lymphocyte potassium channels involved in autoimmune processes.