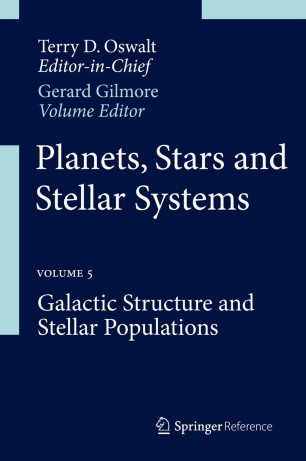 This is volume 5 of Planets, Stars and Stellar Systems, a six-volume compendium of modern astronomical research, covering subjects of key interest to the main fields of contemporary astronomy. This volume on “Galactic Structure and Stellar Populations”, edited by Gerard F. Gilmore, presents accessible review chapters on Stellar Populations, Chemical Abundances as Population Tracers, Metal-Poor Stars and the Chemical Enrichment of the Universe, The Stellar and Sub-Stellar Initial Mass Function of Simple and Composite Populations, The Galactic Nucleus, The Galactic Bulge, Open Clusters and Their Role in the Galaxy, Star Counts and the Nature of Galactic Thick Disk, The Infrared Galaxy, Interstellar PAHs and Dust, Galactic Neutral Hydrogen, High-Velocity Clouds, Magnetic Fields in Galaxies, Astrophysics of Galactic Charged Cosmic Rays, Gamma-Ray Emission of Supernova Remnants and the Origin of Galactic Cosmic Rays, Galactic Distance Scales, Globular Cluster Dynamical Evolution, Dynamics of Disks and Warps, Mass Distribution and Rotation Curve in the Galaxy, Dark Matter in the Galactic Dwarf Spheroidal Satellites, and History of Dark Matter in Galaxies.

Dr. Terry D. Oswalt, an astronomer, is Head of the Department of Physics and Space Sciences and Associate Provost for Research at Florida Institute of Technology. He has also served the U.S. National Science Foundation as program officer for Stellar Astronomy and Astrophysics. He earned his Ph.D. in Astronomy at the Ohio State University specializing in photoelectric and spectroscopic studies of binary star systems, late stages of stellar evolution, minor planets, and comets.

Gerard Gilmore is Professor of Experimental Philosophy at the Institute of Astronomy, Cambridge University, UK. He completed his PhD in New Zealand, then worked for five years at the Royal Observatory Edinburgh on the first digitisation of the Sky Survey photographic plates being obtained at the newly-commissioned UK Schmidt Telescope, before moving to Cambridge.

He is a member of a very large number of local, national and international review, policy and assessment committees, has been UK Scientific Representative on the Council of the European Southern Observatory, is Scientific Coordinator of OPTICON, the EC Optical-Infrared Coordination Coordination Network for Astronomy, is UK Principal Investigator for the ESA Gaia mission, and is Co-PI of the Gaia-ESO Public Spectroscopic Survey.

The early photographic star count studies led to significantly improved determination of the low-luminosity stellar mass function, with implications for the possible significance of baryonic dark matter. These star-count studies independently discovered the Galactic Thick Disk.
Adding kinematics and spectroscopy to these star counts made possible an improved determination of the density and distribution of Dark Matter near the Sun, with a result which remains the accepted value 30 years later.
Later studies involved determination of the chemical abundance distributions and kinematics in the various Stellar Populations, and their interpretation. Discovery of the Sagittarius dwarf galaxy, the "smoking gun"  evidence for ongoing Galactic assembly, became the beginnings of many studies of Galactic satellite galaxies, their implications for early galaxy formation, and the spatial distribution of Cold Dark Matter. These studies continue, with some 600 publications to date.