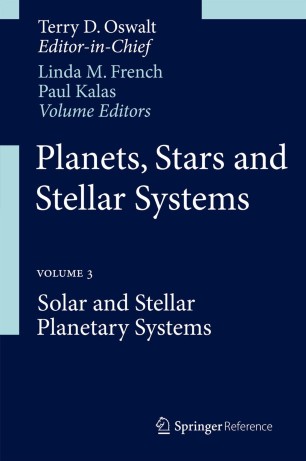 This is volume 3 of Planets, Stars and Stellar Systems, a six-volume compendium of modern astronomical research covering subjects of key interest to the main fields of contemporary astronomy. This volume on “Solar and Stellar Planetary Systems” edited by Linda French and Paul Kalas presents accessible review chapters From Disks to Planets, Dynamical Evolution of Planetary Systems, The Terrestrial Planets, Gas and Ice Giant Interiors, Atmospheres of Jovian Planets, Planetary Magnetospheres, Planetary Rings, An Overview of the Asteroids and Meteorites, Dusty Planetary Systems and Exoplanet Detection Methods.

Linda French earned her A. B. degree in astronomy from Indiana University and her M.S. and Ph.D. in planetary astronomy from Cornell University.  She has been a member of the Illinois Wesleyan faculty since 2002, where she is currently Chair of the Physics Department.  Dr. French has served as Education Officer and as Secretary of the Division for Planetary Sciences of the American Astronomical Society.  Her primary astronomical research focuses on the physical properties of primitive Solar System objects such as distant asteroids and comets.  She has a particular interest in the nature and provenance of the Jovian Trojan asteroids.  Dr. French is a frequent observer at telescopes around the world and involves undergraduate students in her research.

Dr. Kalas is an Associate Adjunct Professor in UC Berkeley's Department of Astronomy since 2000.  Previously he was a postdoctoral scholar at the Space Telescope Science Institute in Baltimore, Maryland, and the Max-Planck Institute for Astronomy in Heidelberg, Germany.  He received his Ph.D. in 1996 from the University of Hawaii, conducting a survey for dusty debris disks with one of the first stellar coronagraphs ever made.  He continues to use state-of-the-art, high-contrast imaging instruments for the direct detection of planetary systems around nearby stars.  Using ground-based coronagraphy and the Hubble Space Telescope he has discovered several dusty debris disks as well as Fomalhaut b, which earned recognition as one of the most important scientific discoveries of 2008.  He is also a lead co-investigator of the Gemini Planet Imager science team, founded the Spirit of Lyot conference series, and developed the first comprehensive course on science ethics for graduate students in astronomy.