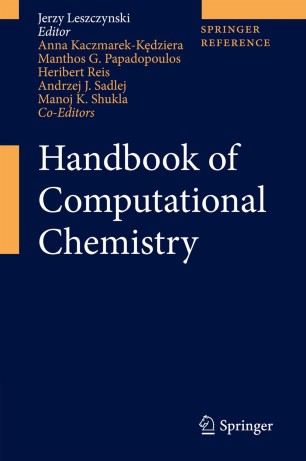 The role the Handbook of Computational Chemistry is threefold. It is primarily intended to be used as a guide that navigates the user through the plethora of computational methods currently in use; it explains their limitations and advantages; and it provides various examples of their important and varied applications.

This reference work is presented in three volumes. Volume I introduces the different methods used in computational chemistry.  Basic assumptions common to the majority of computational methods based on molecular, quantum, or statistical mechanics are outlined and special attention is paid to the limits of their applicability.

Volume II portrays the applications of computational methods to model systems and discusses in detail molecular structures, the modelling of various properties of molecules and chemical reactions. Both ground and excited states properties are covered in the gas phase as well as in solution. This volume also describes Nanomaterials and covers topics such as clusters, periodic, and nano systems. Special emphasis is placed on the environmental effects of nanostructures.

Volume III is devoted to the important class of Biomolecules. Useful models of biological systems considered by computational chemists are provided and RNA, DNA and proteins are discussed in detail. This volume presents examples of calcualtions of their properties and interactions and reveals the role of solvents in biologically important reactions as well as the structure function relationship of various classes of Biomolecules.

Jerzy Leszczynski - Professor of Chemistry and President’s Distinguished Fellow at the Jackson State University (JSU) joined the faculty of the JSU Department of Chemistry in 1990. Dr. Leszczynski attended the Technical University of Wroclaw (TUW) in Wroclaw, Poland obtaining his M.S (1972) and Ph.D. (1975) degrees. During the period 1976

–1986 he served as a faculty member at the TUW. In 1986 he moved to USA, initially as a visiting scientist at the University of Florida, Quantum Theory Project (1986-88) and as a research associate at the University of Alabama at Birmingham (1988-1990). During the period 1998 – 2008 Dr. Leszczynski had served as the director for the Computational Center for Molecular Structure and Interactions (NSF-CREST Center). Since October 2008 he directs new Interdisciplinary Nanotoxicity CREST Center at JSU. Dr. Leszczynski is a computational quantum chemist whose vast areas of interest include: nature of chemical bonds, theoretical predictions of molecular potential energy surfaces and vibrational spectra, structures and properties of molecules with heavy elements, properties and structure of DNA fragments, and characteristics of nanomaterials. He also applies computational chemistry methods to environmental problems, surface chemistry and atmospheric chemistry. Two areas of his research contributions are the most noticeable: investigations of DNA fragments and development of novel techniques for investigation of properties and toxicity of nanomaterials.