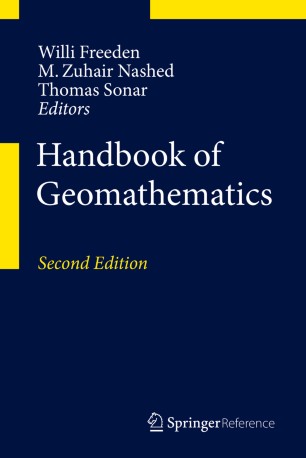 During the last three decades geosciences and geo-engineering were influenced by two essential scenarios: First, the technological progress has changed completely the observational and measurement techniques. Modern high speed computers and satellite based techniques are entering more and more all geodisciplines. Second, there is a growing public concern about the future of our planet, its climate, its environment and about an expected shortage of natural resources. Obviously, both aspects, viz. efficient strategies of protection against threats of a changing Earth and the exceptional situation of getting terrestrial, airborne as well as space borne data of better and better quality explain the strong need of new mathematical structures, tools and methods. Mathematics concerned with geoscientific problems, i.e., Geomathematics, is becoming increasingly important.

The ‘Handbook of Geomathematics’ deals with the qualitative and quantitative properties for the current and possible structures of the system Earth. As a central reference work it comprises the following geoscientific fields: (I) observational and measurement key technologies (II) modelling of the system Earth (geosphere, cryosphere, hydrosphere, atmosphere, biosphere) (III) analytic, algebraic and operator-theoretic methods (IV) statistical and stochastic methods (V) computational and numerical analysis methods (VI) historical background and future perspectives.

Thomas Sonar is professor of Mathematics and head of the Institute of Computational Mathematics at Technische Universität Braunschweig.

“The second edition has greatly expanded the scope of topics beyond those in the first edition. … the chapters are well written, and even the casual readers will find much descriptive material to enjoy. Indeed, the editors have performed a great service to the geomathematics community (and beyond) in this major update of the first edition of the Handbook.” (John Adam, Mathematical Reviews, August, 2017)