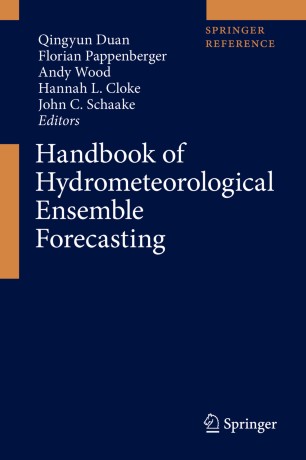 “Handbook of Hydrometeorological Ensemble Forecasting” is mainly contributed by the group of experts from HEPEX as a central reference work from this field.

Qingyun Duan (EIC): National Chair Professor and Chief Scientist of Faculty of Geographical Science at Beijing Normal University, author of >120 peer reviewed scientific papers.  He is currently on editorial boards of several scientific journals and was the lead editor of the American Geophysical Union Water Science and Applications Monograph series “Calibration of Watershed Models”. He is a Fellow of American Geophysical Union and American Meteorological Society.

Florian Pappenberger (Co-EIC): Director of Forecasts at the European Centre For Medium-Range Weather Forecasts. The Forecast Department at ECMWF has a strong user focus and undertakes production of forecasts, forecast evaluation and diagnostics, development of forecast products and applications, software development, catalogue and data services and outreach and training. Florian has a scientific background in the forecasting of weather driven natural hazards including floods, droughts, windstorms, forest fires and impacts on human health. He has over 10 years of expertise in operational probabilistic forecasting, extreme value statistics and numerical model system development at ECMWF. He was responsible for the development and implementation of the operational centre of the Copernicus Emergency Service - Early Warning Systems (floods). Florian is the author of over 150 publications, has won several scientific awards and is visiting Professor at the University of Bristol. He is an elected fellow of the Royal Geographical Society and the Royal Meteorological Society and a member of several other professional bodies including HEPEX, British Hydrological Society, EGU, AGU, EMS, AMS. He is on the editorial board of several international scientific journals and regularly advises on international committees including WMO.

Andy Wood (Co-EIC):a Development and Operations Hydrologist for the U.S. National Weather Service, Dr. Wood is also the Chair of the Hydrology Committee of the American Meteorological Society (AMS), an associate editor of the AMS Journal of Hydrometeorology, and a co-leader of the Hydrologic Ensemble Prediction Experiment (HEPEX).  He previously worked as a research professor at the University of Washington Department of Civil and Environmental Engineering, and as the lead Scientist of a private renewable energy prediction firm, and has co-authored over 40 scientific publications focusing on hydrologic prediction, downscaling and climate change impact assessment, drought and other topics.

Hannah is Visiting Professor in the Department of Earth Sciences at Uppsala University, Sweden. She is an elected fellow of the Royal Geographical Society and the Royal Meteorological Society. She works closely with the Environment Agency, the European Centre for Medium-Range Weather Forecasts (ECMWF) and the UK Met Office, as well as a wide range of other national and international partners. Hannah advises government on national and international flooding incidents and provides expert commentary in the media. She is Executive editor of Hydrology and Earth System Sciences and an active member of the HEPEX initiative.

John Schaake (co-EIC): formerly Chief Scientist with Office of Hydrologic Development, NOAA National Weather Service.  He retired from National Weather Service after over 20 years of service in 2001.  In retirement, he initiated the Hydrologic Ensemble Prediction Experiment (HEPEX) in 2004 and served as the inaugural co-chair for HEPEX scientific steering committee.  Dr. Schaake is an internationally recognized expert on hydrometeorological ensemble forecasting and published extensively on hydrometeorological ensemble forecasting.  Prior to his service in NOAA, he was an Associate Professor at Massachusetts Institute of Technology and University of Florida. He has served on editorial boards of various hydrology and water resources journals and various leadership posts of international organizations.  He has been elected a Fellow of American Geophysical Union and American Meteorological Society.