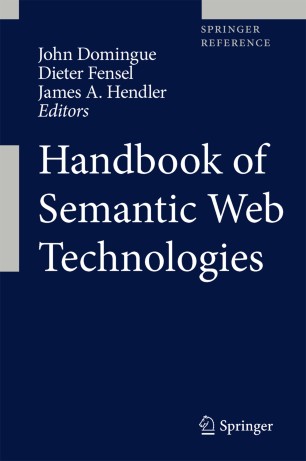 After years of mostly theoretical research, Semantic Web Technologies are now reaching out into application areas like bioinformatics, eCommerce, eGovernment, or Social Webs. Applications like genomic ontologies, semantic web services, automated catalogue alignment, ontology matching, or blogs and social networks are constantly increasing, often driven or at least backed up by companies like Google, Amazon, YouTube, Facebook, LinkedIn and others. The need to leverage the potential of combining information in a meaningful way in order to be able to benefit from the Web will create further demand for and interest in Semantic Web research.

This movement, based on the growing maturity of related research results, necessitates a reliable reference source from which beginners to the field can draw a first basic knowledge of the main underlying technologies as well as state-of-the-art application areas. This handbook, put together by three leading authorities in the field, and supported by an advisory board of highly reputed researchers, fulfils exactly this need. It is the first dedicated reference work in this field, collecting contributions about both the technical foundations of the Semantic Web as well as their main usage in other scientific fields like life sciences, engineering, business, or education.

Dr. Dieter Fensel, PhD, holds a professorship at the University of Innsbruck. He has published over 240 articles and fifteen monographs, authored one U.S. patent and chaired or contributed to over 200 scientific initiatives, committees, and advisory boards. He has been an executive member in over 50 international projects funded under the Europe IST framework, the Irish SFI framework, the Austrian FWF and FFG, and the Tyrolean TransIT frameworks. In 2007, Fensel co-founded the Semantic Technology Institute (STI) International with the aim of establishing semantics as core pillar of modern Computer Science. Also in 2007, he co-founded a start-up company, Seekda, whose mission is to facilitate on-demand usage of services over the Web. Seekda is the first global Web service search engine that provides access to publicly available Web services; in its first year, it has already become the world’s largest registry of Web services.

John Domingue is the Deputy Director of the Knowledge Media Institute at The Open University, UK. He has published over 100 refereed articles in the areas of semantic Web services, semantic web, ontologies and human computer interaction. Up until last year he was the Scientific Director of DIP, an EU Integrated Project (IP) on semantic Web services which involved seventeen partners and had a budget of 16M Euros. Also last year, he Chaired the European Semantic Web conference. Currently he is the Scientific Director of SUPER, another EU IP which unites semantic Web services and business process modeling. Dr Domingue currently sits on the Steering Committee for the European Semantic Conference Series, is a co-Chair of the WSMO working group and a co-Chair of the OASIS Semantic Execution Environment Technical committee.

James Hendler is an artificial intelligence researcher at Rensselaer Polytechnic Institute and one of the originators of the Semantic Web. He was the Director for Semantic Web and Agent Technology at the Maryland Information and Network Dynamics Laboratory as well as a Fellow of the American Association for Artificial Intelligence and the British Computer Society. He is Editor-in-Chief Emeritus of IEEE Intelligent Systems and is the first computer scientist to serve on the Board of Reviewing Editors for Science. Hendler was co-author of the article "The Semantic Web" which appeared in Scientific American in 2001, now the most cited paper in the Semantic Web area. He has authored or edited many books including Semantic Web for the Working Ontologist (2008), Spinning the Semantic Web (2005), Robots for Kids (2000), Massively Parallel Artificial Intelligence (1994), Expert Systems: The User Interface (1988), and Integrating Marker-Passing and Problem Solving (1987).

“This handbook is a massive two-volume, 1,000-page, 22-chapter work on the topic. … Volume 1, comprising 14 chapters, covers semantic Web basics and various technologies. … The second volume contains eight chapters, each detailing an applications area of semantic Web technology. … The first volume of this set may be useful to those who want to learn more about the subject, while the second volume may be of more interest to practitioners in the discipline. Summing Up: Recommended. Graduate students and above.” (J. Beidler, Choice, Vol. 49 (7), March, 2012)

“This handbook is an achievement. The editors have included an incredible amount of material in only two volumes … . Each chapter includes enough details that readers will be able to comprehend the significance of the information and use the generous list of references at the end of each chapter to track down complementary papers and books on the topics. This handbook is a job well done.” (Anthony J. Duben, ACM Computing Reviews, February, 2012)