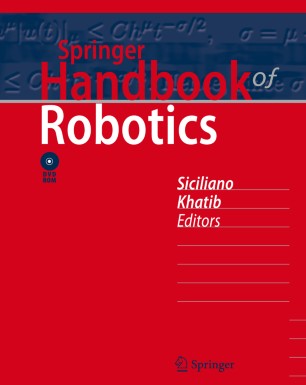 Reaching for the human frontier, robotics is vigorously engaged in the growing challenges of new emerging domains. Interacting, exploring, and working with humans, the new generation of robots will increasingly touch people and their lives. The credible prospect of practical robots among humans is the result of the scientific endeavour of a half a century of robotic developments that established robotics as a modern scientific discipline. The Springer Handbook of Robotics brings a widespread
and well-structured compilation of classic and emerging application areas of robotics. From the foundations to the social and ethical implications of robotics, the handbook provides a comprehensive collection of the accomplishments in the field, and constitutes a premise of further advances towards new challenges in robotics.
This handbook, edited by two internationally renowned scientists with the support of an outstanding team of seven part editors and onehundred sixty-four authors, is an authoritative reference for robotics researchers, newcomers to the field, and scholars from related disciplines such as biomechanics, neurosciences, virtual simulation, animation, surgery, and sensor networks among others.