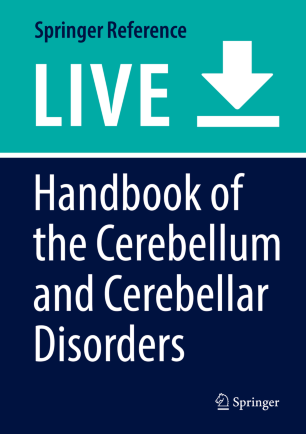 Handbook of the Cerebellum and Cerebellar Disorders

Our knowledge of cerebellar functions and cerebellar disorders, called ataxias, is increasing considerably. Studies of the cerebellum are now a central focus in neuroscience. During the last four decades, many laboratories worldwide have dedicated their research activities to understanding the roles of the cerebellum in motor control, cognitive processes and biology of mental processes, behavioral symptoms, and emotion. It is now accepted that the cerebellum acts as a cognitive operator in learning, perception, and attention. Moreover, major improvements in our assessment of in vivo cerebellar architecture using imaging techniques have occurred. A typical example is the accurate description of cerebellar anatomy during fetal development with MRI, a progress which has direct impacts on patient care. These advances have been associated with discoveries of new clinical disorders, in particular in the field of genetic ataxias. More than 20 new genes have been identified these last 10 years. Only for dominant ataxias, more than 30 diseases have now been unravelled. The number of ataxic disorders will increase with aging, the cerebellum being the structure of the brain with the most important loss of neurons with age. More than 300 different cerebellar disorders are encountered during daily practice, but we are missing a single source of information explaining their pathogenesis. Despite the immense amount of knowledge acquired about the cerebellar circuitry these last years, a large book covering the neuroscience of the cerebellum is missing. The goal of this endeavour is to bring up to date information relevant for basic science and also for clinical activities. To reach this goal, the most renowned authors are gathered in a unique and in-depth book with a format of a handbook. We emphasize the connections between molecular findings, imaging features, behavioural/neuropsychological aspects, and clinical implications.

M. Manto is neurologist. He is researcher at the FNRS-Belgium. He is the founding and current editor of the international journal The Cerebellum (Springer). He is the President of the Medical Board of Euro-Ataxia. He has founded the Society for Research on the Cerebellum (www.socrecer.org).

Our laboratory is funded by national and international research organisations:

Works carried out so far have been published in international peer-reviewed journals.