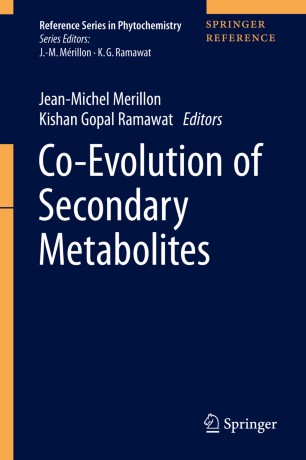 Chapters from expert contributors are organised into twelve sections that collate the current knowledge in intra-/inter-specific diversity in plant secondary metabolites, changes in secondary metabolites during plants’ adaptation to different environmental conditions, and co-evolution of host-parasite metabolites. Among the twelve themed parts, readers will also discover expert analysis on the genetics and chemical ecology evolution of secondary metabolites, and particular attention is also given to allelochemicals, bioactive molecules in plant defence and the evolution of sensory perception in vertebrates.This reference work will appeal to students, researchers and professionals interested in the field of plant pathology, plant breeding, biotechnology, agriculture and phytochemistry.

Prof. Dr. Jean-Michel Mérillon received his Pharm.D. (1979), Ph.D. (1984), and HDR (1992) from the University of Tours in France. He joined the same university as assistant professor in 1981 and became associate professor in 1987. In 1993, he moved to the Faculty of Pharmacy, University of Bordeaux, France, accepting a position as full professor. He is currently leading the “study group on biologically active plant substances” at the Institute of Vine and Wine Sciences, which comprises 25 scientists and research students. The group has been working on phenolic compounds from vine and wine for many years, mainly complex stilbenes and their involvement in health. Prof. Mérillon has supervised the doctoral theses of 20 students. He is involved in developing teaching on plant biology, natural bioactive compounds, and biotechnology.

Prof. Mérillon has published more than 150 research papers in internationally recognized journals, resulting in an H index of 48 (documents published between 1996 and 2019). He has co-edited books and reference works on secondary metabolites and biotechnology.

Throughout his career, Prof. Mérillon has traveled widely as a senior professor. Scientists from several countries have been and are working in his laboratory, and his research is supported by funding from the Aquitaine Regional Government, the Ministry of Higher Education and Research, and various private companies. In 2004, he founded the technology transfer unit “Polyphenols Biotech,” providing support for R&D programs for SMEs and major groups from the cosmetic, pharmaceutical, agricultural, and health-nutrition sectors.

Prof. Ramawat had done his postdoctoral studies at the University of Tours, France, from 1983 to 1985, and later returned to Tours as visiting professor (1991). He also visited the University of Bordeaux 2, France, several times as visiting professor (1995, 1999, 2003, 2006, 2010) and Poland in 2005 during an academic exchange program (2005). Through these visits in France, Prof. Ramawat and Prof. Mérillon established a strong connection, which has resulted in productive collaborations and several book and reference work publications.

Prof. Ramawat has published more than 170 well-cited peer-reviewed papers and articles and edited several books and reference works on topics such as the biotechnology of medicinal plants, secondary metabolites, bioactive molecules, herbal drugs, and many other topics. His research was funded by several funding agencies.

In his research group, Prof. Ramawat has supervised doctoral thesis of 25 students. He is an active member of several academic bodies, associations, and editorial boards of journals.