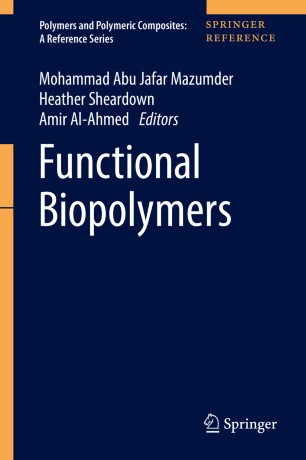 Part of the Polymers and Polymeric Composites: A Reference Series book series (POPOC)

This reference work offers a comprehensive overview of the synthesis, properties and biomedical applications of functional biopolymers. Chapters from expert contributors cover topics such as synthetic biopolymers, blood-compatible polymers, ophthalmic polymers and stimuli responsive polymers. An up-to-date review of cell encapsulation strategies and cell surface and tissue engineering is also included in this work, and readers will discover more about hydrogels and polymers from renewable resources.

Edited by an international team of experts in the field, this reference work will appeal to researchers, scientists, and practitioners working in this field, or entering this vibrant research area.

Dr. Mohammad Abu Jafar Mazumder is an Associate Professor of Chemistry at King Fahd University of Petroleum and Minerals (KFUPM), Saudi Arabia, who has a wide experience in design, synthesis, modification, and characterization of various organic compounds and ionic and thermo-responsive polymers using various spectroscopic and chromatographic techniques. Dr. Jafar Mazumder earned his Ph.D. in Chemistry) (2009) from McMaster University, Canada, followed by 2 years MITACS Postdoctoral Fellowship in Chemical and Biomedical Engineering at McMaster University, Canada. In 17 years of academic research, Dr. Jafar Mazumder has had the opportunity to work with several international collaborative research groups and has exposed himself to a broad range of research areas, including chemistry, engineering, and material sciences where he developed and engineered synthetic and natural organic and polymeric materials for various applications. Dr. Jafar Mazumder secured 5 US patents, edited 2 books, and published more than 50 peer-reviewed journal articles/invited book chapters. He had an opportunity to present his research in more than 25 international conferences. Dr. Jafar Mazumder has conducted and completed several internally and externally funded research projects from KFUPM, Saudi Aramco, KACST, and NSTIP. Currently, he is actively involved in a number of ongoing university and client-funded research projects in which he is responsible for the synthesis and characterization of various materials including modification of monomers and polymers for their potential use as corrosion inhibitors and for the removal of heavy metal ions and organic contaminants from aqueous samples.

Heather Sheardown is a Professor in the Department of Chemical Engineering with a cross-appointment to the Department of Pathology and Molecular Medicine and an adjunct appointment with the School of Optometry at the University of Waterloo. She holds a Tier 1 Canada Research Chair in Ophthalmic Biomaterials and Drug Delivery and has published more than 140 peer-reviewed papers on this subject. She is currently the Scientific Director of C20/20, an ORF-funded incubator aimed at the commercialization of ophthalmic biotechnologies. Sheardown was previously the Scientific Director of the 20/20 NSERC Ophthalmic Materials Research Network which brought together 12 researchers and more than 10 companies aimed at the early-stage development of novel materials-based treatments for ophthalmic conditions. Sheardown is the Associate Director of Biomedical Engineering and Advanced Manufacturing (BEAM), a McMaster partnership with the Fraunhofer IZI which partners with companies for incubation and commercialization of cell-based therapies, diagnostics, and biomaterials. She holds 18 patents or provisional patents and is currently the Chief Scientific Officer of 20/20 OptimEyes, a McMaster-based spinout focused on developing and commercializing a micelle-based technology developed in her laboratory. She runs a large and vibrant research group with more than ten postdoctoral fellows and graduate students.

Dr. Amir-Al-Ahmed is working as a Research Scientist- II (Associate Professor) in the Center of Research Excellence in Renewable Energy (CoRE-RE) at King Fahd University of Petroleum and Minerals (KFUPM), Saudi Arabia. He graduated in Chemistry from the Department of Chemistry, Aligarh Muslim University (AMU), India, and then completed his M.Phil. (2001) and Ph.D. (2003) in Applied Chemistry from the Department of Applied Chemistry, AMU, India, followed by three consecutive postdoctoral fellowships in South Africa and Saudi Arabia. During this period, he worked on various multidisciplinary projects, in particular, electrochemical sensors, nano-materials, proton-exchange membranes, direct methanol fuel cell (DMFC), electro-catalysis, and solar cells. At present, his research activity is fundamentally focused on third-generation solar cell devices such as low band gap semiconductor quantum dot structures, perovskite cells, and silicon nanowire-based tandem cells. At the same time, he is also having projects on PCM-based latent heat energy storage, evaluation of electricity storage devices, and dust repellent coating for harsh Saudi Arabian weather condition. He has worked on different KACST-, NSTIP-, and Saudi Aramco-funded projects in the capacity of a co-investigator and principle investigator. Dr. Amir has 2 US patents, over 60 journal articles, invited book chapters, and conference publications. He has edited nine books with Trans Tech Publications and Elsevier, and several other books are in progress. He is also the Editor in Chief of an international journal Nano Hybrids and Composites along with Professor Y. H. Kim.