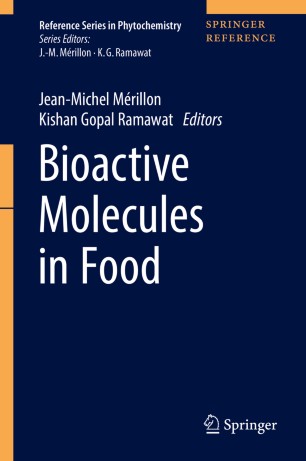 This reference work provides comprehensive information about the bioactive molecules presented in our daily food and their effect on the physical and mental state of our body. Although the concept of functional food is new, the consumption of selected food to attain a specific effect existed already in ancient civilizations, namely of China and India. Consumers are now more attentive to food quality, safety and health benefits, and the food industry is led to develop processed- and packaged-food, particularly in terms of calories, quality, nutritional value and bioactive molecules.

Written by highly renowned scientists of the field, this reference work appeals to a wide readership, from graduate students, scholars, researchers in the field of botany, agriculture, pharmacy, biotechnology and food industry to those involved in manufacturing, processing and marketing of value-added food products.

Professor Dr. Jean-Michel Merillon received his M.Pharma. (1979) and Ph.D. (1984) from the University of Tours, France. He joined the University of Tours as assistant professor in 1981, became associate professor in 1987. In 1993 he moved to the faculty of Pharmacy, University of Bordeaux, France, accepting a position as full professor. He has been the director of the research group on biologically active plant substances for over 15 years, at the Institute of Vine and Wine Sciences (University of Bordeaux, France), which comprises 25 scientists and research students. The group has been working on phenolic compounds from vine and wine for many years, mainly complex stilbenes and their involvement in health. He is involved in developing teaching on plant biology, natural bioactive compounds and biotechnology. Prof. Mérillon has published more than 160 research papers in internationally recognized journals, and has coedited books and reference works on secondary metabolites and biotechnology. In 2004, he founded the technology transfer unit “Polyphenols Biotech”, providing support for R&D programs for SMEs and major groups from the cosmetic, pharmaceutical, agricultural and health-nutrition sectors. He is currently the manager of this unit.
Professor Dr. Kishan Gopal Ramawat is former professor and head of the Botany Department, M.L. Sukhadia University, Udaipur, India, and has a long-standing research experience. He received his Ph.D. in Plant Biotechnology in 1978 from the University of Jodhpur, India, and afterward joined the university as a faculty member. In 1991, he moved to the M.L. Sukhadia University in Udaipur as associate professor and became professor in 2001. He served as the head of the Department of Botany (2001–2004, 2010–2012), was in charge of the Department of Biotechnology (2003–2004), was a member of the task force on medicinal and aromatic plants of the Department of Biotechnology, Government of India, New Delhi (2002–2005), and coordinated UGC-DRS and DST-FIST programs (2002–2012). Professor Ramawat had done his postdoctoral studies at the University of Tours, France, from 1983 to 1985 and later returned to Tours as visiting professor (1991). He also visited the University of Bordeaux 2, France, several times as visiting professor (1995, 1999, 2003, 2006, 2010) and, in 2005, in Poland in an academic exchange program (2005). Through these visits in France, Prof. Ramawat and Prof. Mérillon established a strong connection, which has resulted in productive collaborations and several book and reference work publications. Professor Ramawat has published more than 170 well-cited peer-reviewed papers and articles and edited several books and reference works on topics such as the biotechnology of medicinal plants, secondary metabolites, bioactive molecules, herbal drugs, and many other topics. His research was funded by several funding agencies. In his research group, Prof. Ramawat has supervised doctoral thesis of 25 students. He is an active member of several academic bodies, associations, and editorial boards of journals. Botany Department, M.L. Sukhadia University, Udaipur, India.