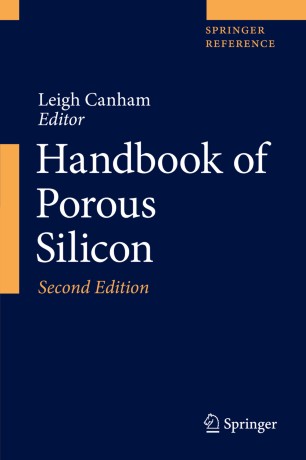 This handbook updates the most fast-moving research areas of porous silicon research, introduces a range of brand new topics not reviewed before and is even more inclusive of worldwide centres of expertise. Rapid advances are being made in porous silicon anodes for lithium batteries, biodegradable nanoparticles and nanoneedles for medical therapy and imaging, energetics and bio-diagnostic techniques. A number of additional characterization and processing techniques are also reviewed for the first time. Experts from 10 additional countries are involved in the 2nd edition: China, Vietnam, Singapore, Malaysia, Saudi Arabia, Turkey, Netherlands, Switzerland, Belarus, and Brazil, making more than 40 countries in total. The handbook therefore covers expertise from every continent. Another new feature is a review dedicated to industrial activity. This second edition endeavours to provide the community with a truly comprehensive database and up-to-date commentary on this versatile nanostructured material.

Leigh Canham has over 30 years of experience conducting research on widely differing aspects of silicon technology.  Two key personal discoveries – that silicon can emit light efficiently (1990) and be rendered medically biodegradable (1995) have had significant academic impact (>20,000 citations) and commercial impact (multiple company creation).  Leigh is a scientist devoted to finding novel properties and uses for the semiconductor that already pervades our everyday lives. He has 15 years of experience with start-up company management, right through from co-founding with seed VC finance to NASDAQ listing. He has served on the board of two companies based in England, one in Singapore, and one in Australia. Since 1999 he has held an Honorary Professorship at the University of Birmingham for his work on luminescent silicon. In 2011 Leigh was a shortlisted finalist for the “European Inventor of the Year” Award from the European Patent Office for his work on biodegradable silicon. In 2012 he became a Thomson Reuters Citation Laureate for his work on luminescent silicon and in 2015 he won the FEMS Materials Innovation Prize, awarded biannually by the Federation of European Materials Societies.