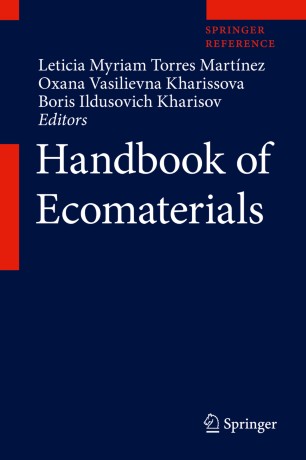 The chapters are written by global leaders in their fields. The book will cater to the strong and ever-increasing demand for energy, benign materials, and cost efficiency.  Eco-materials is arguably one of the most important fields of modern science & technology.

Professor Dr. Leticia Myriam Torres-Martínez is recognized as Certified Leader in Renewable Energy and Energy Efficiency Applied by Harvard University, USA. She has the following academic products: more than 181 indexed articles, 67 directed thesis, 1 authorized patent and 4 registered, 7 chapters book, 2 books, 383 international lectures, 9 proceeding books, 27 innovations and technological developments, 57 research projects, 2,056 citations to publications, leader of 5 research groups and 3 national scientific networks, 5 designed and implemented postgraduate programs. Two of these programs were designed and offered as UNI-Enterprise (Vitro and Cemex). She designed and implemented the Center for Research and Development of Ceramic Materials (CIDEMAC), which was self-financed during her leadership. From the year 2009, she led a technological development project with PEMEX, which allowed the pre-boot technology change in their processes. This project concluded successfully in December 2012.

She has more than 62 national and international awards and recognitions, which we highlight: 1) Twenty one Awards for UANL Best Research Work in Exact Sciences and Engineering and Technology areas. The most recent in 2018, awarded in Exact Sciences. 2) Recognition "Flame, Life and Woman" by remarkable career and outstanding work in the field of Education and Research, as part of International Women's Day. UANL, in 2012. 3) Appointment as Member of the Board and Representative of researchers in the areas VI and VII of SNI in the Technological and Scientific Advisory Forum 2008 to 2011. 4) Nomination of CIDEMAC in the National Award of Technology by SECOFI, it was one of the 3 FINALISTS companies of technology research (out of 180), awarded in Los Pinos and headed by President Ernesto Zedillo Ponce de Leon in 2000; 5) In 2018 she won the National Award of Science in Mexico and received it from the hands of the Mexican President Enrique Peña Nieto.

Dr. Oxana Vasilievna Kharissova (born in 1969 in Ukraine, former USSR, has lived in Mexico from 1995, and naturalized in Mexico in 2004) is currently a Professor and Researcher at the UANL. Degrees: An MS in 1994, in crystallography from Moscow State University, Russia, and a Ph.D. in Materials from the Universidad Autónoma de Nuevo León, Mexico. Memberships: National Researchers System (Level II), Materials Research Society. She is the co-author of six books, 3 book chapters, 85 articles, and holds four patents. Specialties: Materials, nanotechnology (carbon nanotubes, nanometals, fullerenes), microwave irradiation and crystallography; nanotechnology-based methods for petroleum treatment.

Dr. Boris Ildusovich Kharisov (born in 1964, in Russia, has lived in Mexico from 1994, and naturalized in Mexico in 2003) is currently a Professor and Researcher at the Universidad Autónoma de Nuevo León (UANL). He took part in the liquidation of the consequences of the Chernobyl accident, working in the contaminated zone in 1987. Degrees: An MS in 1986, in radiochemistry and a PhD in inorganic chemistry in 1993, from the Moscow State University, Russia; Dr. Hab. in physical chemistry in 2006 from Rostov State University, Russia. Memberships: Mexican Academy of Science, National Researchers System (SNI, Level II), Materials Research Society. He is the co-author of ten books, 166 articles, 10 book chapters, and holds four patents. Co-editor: Three invited special issues of international journals. He is the member of the Editorial board of three journals. Specialties: Materials chemistry, coordination and inorganic chemistry, phthalocyanines, ultrasound, nanotechnology, chemical treatment of petroleum, environmental remediation. Dr. Kharisov has three children. His biography was published in: “Who is Who in the World”, “Outstanding People of the Twentieth Century”, and so on.