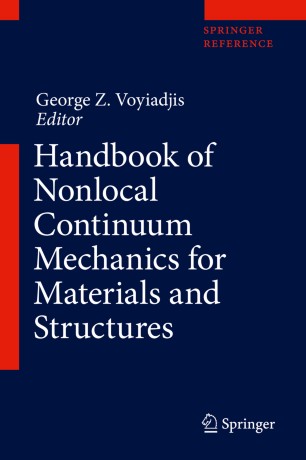 Handbook of Nonlocal Continuum Mechanics for Materials and Structures

This handbook covers all areas of nonlocal continuum mechanics including theoretical aspects,computational procedures, and experimental advances. The multidisciplinary scope of articles that comprise this reference are written by internationally recognized experts in the field and stand as the most-up-to-date, established knowledge base on using nonlocal continuum mechanics to characterize material behavior for advanced composites and nano-materials, as well as for engineering scale structures. The handbook is at once a comprehensive reference for academic researchers and engineers in industry concerned with nonlocal continuum mechanics for materials and structures as well as a supplement for graduate courses on a range of topics.

since February of 2001. He currently also serves since 2012 as the Director of the Louisiana State University Center for GeoInformatics (LSU C4G; http://c4gnet.lsu.edu/c4g/).

Voyiadjis is a Foreign Member of both the Polish Academy of Sciences, Division IV (Technical Sciences),and the National Academy of Engineering of Korea. He is the recipient of the 2008 Nathan M. Newmark Medal of the American Society of Civil Engineers and the 2012 Khan International Medal for outstanding lifelong contribution to the field of plasticity. He was

of Damage Mechanics and is held every 3 years. Voyiadjis was honored in April of 2012 by the International Symposium on “Modeling Material Behavior at Multiple Scales” sponsored by Hanyang University, Seoul, Korea, chaired by T. Park and X. Chen (with a dedicated special issue in the Journal of Engineering Materials and Technology of the ASME). He was also honored by an International Mini-Symposium on “Multiscale and Mechanism Oriented Models: Computations and Experiments” sponsored by the International Symposium on Plasticity and Its Current Applications, chaired by V. Tomar and X. Chen, in January 2013.

and is on the editorial board of numerous engineering journals. He was also selected by Korea Science and Engineering Foundation (KOSEF) as one of the only two World-Class University foreign scholars in the area of civil and architectural engineering to work on nanofusion in civil engineering. This is a multimillion research grant. Voyiadjis’ primary research interest is in plasticity and damage mechanics of metals, metal matrix composites, polymers, and ceramics with emphasis on the

Dr. Voyiadjis’ research has been performed on developing numerical models that aim at simulating

the damage and dynamic failure response of advanced engineering materials and structures under high-speed impact loading conditions. This work will guide the development of design criteria and fabrication processes of high-performance materials and structures under severe loading conditions. Emphasis is placed on survivability area that aims to develop and field a contingency armor that is thin and lightweight, but with a very high level of an overpressure protection system that provides low penetration depths. The formation of cracks and voids in the adiabatic shear bands, which are

the precursors to fracture, is mainly investigated. He has 2 patents, over 320 refereed journal articles, and 19 books (11 as editor) to his credit.

He gave over 400 presentations as plenary, keynote, and invited speaker as well as other talks. Over 62 graduate students (36 Ph.D.) completed their degrees under his direction. He has also supervised numerous postdoctoral associates. Voyiadjis has been extremely successful in securing more than $25.0 million in research funds as a principal investigator/investigator from the National Science Foundation, the Department of Defense, the Air Force Office of Scientific Research,

the Department of Transportation, and major companies such as IBM and Martin Marietta.

He has been invited to give plenary presentations and keynote lectures in many countries around the world. He has also been invited as guest editor in numerous volumes of the Journal of Computer Methods in Applied Mechanics and Engineering, International Journal of Plasticity, Journal of Engineering Mechanics of the ASCE, and Journal of Mechanics of Materials. These special issues focus in the areas of damage mechanics, structures, fracture mechanics, localization, and bridging of length scales. He has extensive international collaborations with universities in France, the Republic of Korea, and Poland.