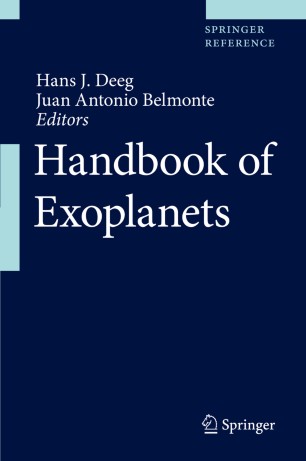 This state-of-the-art reference work includes over 15 sections dealing with all aspects of exoplanets and exobiology research, including historic aspects, the Solar System as a template, objects at the planet-to-star transition, exoplanet detection and characterization with related instrumentation, technology and software tools, planet and planet-system statistics with recent and planned surveys, their atmosphere and formation and evolution processes, habitability and exobiology implications, and outlooks for future exploration and science development, including visionary contributions. Each section has 10-20 contributions written by the top experts in their subject, including both senior researchers as well as young, smart researchers who represent the future of the discipline.
All in all, this handbook comprehensively tackles one of the most challenging and dynamic fields of modern astronomy and astrophysics.

Hans J. Deeg is staff astronomer at the Instituto de Astrofísica de Canarias (Tenerife, Spain), where he arrived in 2001 after holding several postdoctoral positions in both the US and Spain. Born in Germany, he obtained a Master in Physics at SUNY (Buffalo, USA) and received his PhD in 1993 from the University of New Mexico, USA. In 1994, while at Rochester Institute of Technology (New York), he began with ‘TEP’, a pioneering observational project to find transits of extrasolar planets. His principal interests are the detection and characterization of exoplanets, for which he has been working in a wide range of ground and space-based projects. He has been the principal Spanish investigator for the exoplanet detection with the CoRoT space mission (2006-14) and is now coordinating several tasks for ESA’s next generation PLATO space mission, towards its launch in 2023. During his career, he has organized several conferences related to exoplanets as well as binary stars, and authored about 250 scientific articles on the subject. He is also a regular referee for the field’s major journals and for several grant allocation organizations. Deeg has also published software for stellar photometry, as well as ‘UTM’, a flexible simulator for transiting systems. Currently, he is teaching a master-level course on Extrasolar Planets at the University of La Laguna (Tenerife, Spain) and supervising a PhD student on the characterization of exoplanets with the 10.4m GTC telescope.

Juan Antonio Belmonte is staff astronomer at the Instituto de Astrofísica de Canarias (Tenerife, Spain) where he investigates in exoplanets, stellar physics and cultural astronomy. He has published or edited a dozen books and authored nearly 200 publications on those subjects. He has been the Director of the Science and Cosmos Museum of Tenerife from 1995 to 2000, President of the European Society for Astronomy in Culture (SEAC) from 2005 to 2011 and of the Spanish Time Allocation Committee (CAT) of the Canarian observatories, included the new generation 10 m GTC, from 2003 to 2012. He received in 2012 the "Carlos Jaschek" award of the European Society for Astronomy in Culture for his contributions to the discipline. He is now advisory editor of the Journal for the History of Astronomy and has been editor of two sections and the author of 12 contributions in the recent Springer`s Handbook of Archaeoastronomy and Ethnoastronomy (2014). Currently, he is teaching a master-level course on Extrasolar Planets at the University of La Laguna. Born in Murcia (Spain) in 1962, he studied physics and got his master-thesis in 1986 at Barcelona University and obtained his PhD in Astrophysics at La Laguna University in 1989.