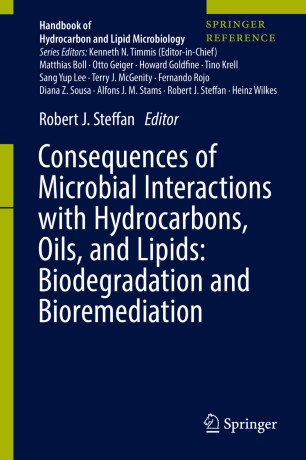 Consequences of Microbial Interactions with Hydrocarbons, Oils, and Lipids: Biodegradation and Bioremediation

In this book international experts discuss the state-of-the-art  in the biological degradation of hydrocarbons to meet remedial or disposal goals.  The work focuses on practical applications, often on globally important scales including the remediation of some of the world’s largest crude oil spills.  Other related chapters discuss important implications of microbial transformation of hydrocarbons, including treatment of high fat processing wastes, impacts of microbial biodegradation activity on industrial processes, and the implications of microbial oil degradation in relation to modern oil extraction processes like hydraulic fracturing of shales and extraction of oil sands.

Dr. Robert J. Steffan received his Ph.D. in biology from the University of Louisville, where he worked on the development of molecular biological tools for monitoring genetically engineered microorganisms in the environment. His work included the first ever application of the polymerase chain reaction (PCR) for monitoring organisms in environmental samples. This early work provided a basis for much of the PCR-based environmental analysis in use today. Following his doctoral studies, he received an Alexander von Humboldt fellowship to perform postdoctoral research at the National Institute for Biotechnology (GBF) in Braunschweig, Germany. There, he worked to identify and genetically engineer biodegradation pathways in bacteria and to evaluate genetic transformation of bacteria in nature. After his postdoctoral studies, he worked in the environmental industry for more than 25 years, where he served as a technical expert to help solve real-world remediation and pollution treatment challenges, and also led a research and development group. His primary research interests were biodegradation of chlorinated solvents and ether-containing pollutants (1,4-dioxane, MTBE, BCEE, etc.), bioaugmentation for remediation, development of novel remediation strategies, and molecular biology of degradative bacteria. He directed the development and commercialization of SDC-9TM, a Dehalococcoides sp.-containing bacterial culture that has been applied at more than 2000 sites for remediation of chlorinated solvent contaminated groundwater. In addition, he led a program that developed a novel patented combinatorial biocatalysis process that resulted in the production of several unique and patented antibiotic compounds with activity against Gram-positive microorganisms including multidrug resistant TB. He has authored more than 100 scientific papers, reports, and book chapters, including two invited review articles in the Annual Review of Microbiology, and has received 11 patents. He has served as a member of the editorial boards of the Journal of Bacteriology and Applied and Environmental Microbiology, and was the recipient of the 2008 Excellence in Review Award from Environmental Science & Technology. He retired from his work in the environmental industry in 2014.