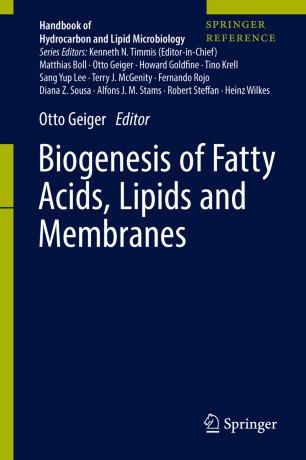 Concise chapters, written by experts in the field, cover a wide spectrum of topics on lipid and membrane formation in microbes (Archaea, Bacteria, eukaryotic microbes).
All cells are delimited by a lipid membrane, which provides a crucial boundary in any known form of life. Readers will discover significant chapters on microbial lipid-carrying biomolecules and lipid/membrane-associated structures and processes.

Otto Geiger studied biology at the University of Hohenheim in Stuttgart, Germany and after investigating “Quinoproteins and their prosthetic group pyrroloquinoline quinone” at the Institute of Microbiology, he received his doctoral title from the same institution in 1987. As a Feodor-Lynen Fellow of the Alexander von Humboldt Foundation, he did postdoctoral work in the United States at Harvard Medical School with Eugene P. Kennedy on the biosynthesis and function of periplasmic glucans in Gram-negative bacteria. Subsequently, together with Ben Lugtenberg and Herman Spaink, he investigated the biosynthesis of lipochitin oligosaccharide signals that cause nodule formation on legume host plants at the Institute of Molecular Plant Sciences, Leiden University in the Netherlands. From 1993 to 1999 he was a Research Group Leader in the Department of Biotechnology at the Technical University of Berlin, where he habilitated for Biochemistry in 1997. Otto Geiger was an International Research Scholar (2002–2006) of the Howard Hughes Medical Institute. He currently holds the position of Professor (Investigador Titular C) at the Center for Genomic Sciences (formerly the Research Center for Nitrogen Fixation) at the National Autonomous University of Mexico (Cuernavaca) which he joined in 1999. Geiger’s group discovered the phosphatidylcholine synthase pathway which constitutes a major route for phosphatidylcholine (lecithin) formation in bacteria as well as the biosynthesis pathway for ornithine-containing lipids which are widespread bioactive lipids encountered in bacterial membranes. More recently, he discovered molecular mechanisms for lipid remodeling of bacterial membranes in response to different types of stress. Presently, he studies the molecular functions of phosphatidylcholine in bacteria as well as the biosynthesis, transport, and function of sphingolipids in bacteria. He functions as an Editor for the journal BMC Microbiology and for the Handbook of Hydrocarbon and Lipid Microbiology.