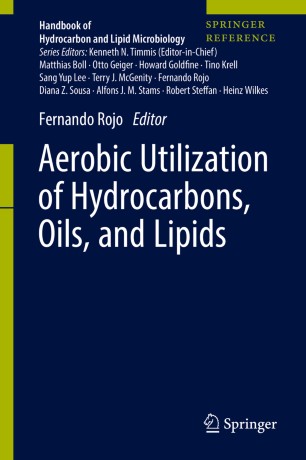 This book describes the biochemistry and genetics of aerobic degradation of hydrocarbons and lipids by bacteria and yeasts, as well as the functional genomics of the best-known microorganisms involved in these processes. It forms part of the Handbook of Hydrocarbon and Lipid Microbiology Series, a definitive resource of current knowledge on the diverse aspects of the interactions of microbes with hydrocarbons and lipids. Chapters are mainly focused on the new discoveries of recent years. It is aimed to scientists and others interested in different aspects of the microbiology of hydrocarbons.

Fernando Rojo studied biochemistry and molecular biology and obtained his Ph.D. degree at the Autonomous University of Madrid, Spain. He undertook postdoctoral training at the Department of Medical Biochemistry of the University of Geneva, Switzerland, and at the Center of Molecular Biology “Severo Ochoa” (CBMSO-CSIC), Madrid, Spain. His work has been devoted to the analysis and modification of bacterial pathways for the degradation of hydrocarbons and toxic compounds and to the elucidation of molecular mechanisms of gene expression in bacteria. During the last 20 years, his research group has been focused on the analysis of the global regulation networks that allow coordinating metabolism in pseudomonads. He has published over 130 papers in international journals. He is currently Research Professor of CSIC and Director of the National Centre of Biotechnology (CNB-CSIC).