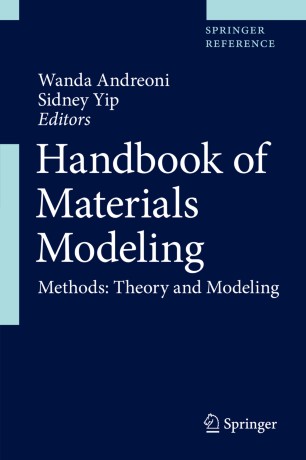 The Handbook of Materials Modeling, 2nd edition is a six-volume major reference serving a steadily growing community at the intersection of two mainstreams of global research: computational science and materials science and technology. This extensively expanded new edition reflects the significant developments in all aspects of computational materials research over the past decade, featuring progress in simulations at multiple scales and increasingly more realistic materials models. Thematically separated into two mutually dependent sets – “Methods: Theory and Modeling (MTM)” and “Applications: Current and Emerging Materials (ACE)” – the handbook runs the entire gamut from theory and methods to simulations and applications. Readers benefit from its in-depth coverage of a broad methodological spectrum extending from advanced atomistic simulations of rare events to data-driven artificial intelligence strategies for materials informatics in the set MTM, as well as forefront emphasis on materials of far-ranging societal importance such as photovoltaics and energy-relevant oxides, and cutting-edge applications to materials for spintronic devices, graphene, cement, and glasses in the set ACE. The thorough, interconnected coverage of methods and applications, together with a line-up of internationally acclaimed editors and authors, will ensure the Handbook of Material Modeling’s standing as an enduring source of learning and inspiration for a global community of computational materials scientists.

Wanda Andreoni is Emeritus Professor of Physics at the Swiss Federal Institute of Technology of Lausanne (EPFL). She has been involved in Computational Materials Science since the early days of her research activity, in both academic and industrial institutions, covering also teaching, organizational, and research managing positions. She is a Fellow of the American Physical Society. She was Zernike Professor at the Groningen University (NL) (2011) and CECAM Director (2009–2012). Regarding editorial work, she was Coeditor of Europhysics Letters (1990–1993) and Editor of The Chemical Physics of Fullerenes 10 (and 5) Years Later, NATO ASI Series E: Applied Sciences, Vol. 316 (Kluwer, 1996), and of The Physics of Fullerene-Based and Fullerene-Related Materials, Series on the Physics and Chemistry of Materials with Low-Dimensional Structures, Vol. 23 (Kluwer, 2000).

Sidney Yip immigrated to the USA from China in 1950 at age 14. After receiving degrees in Mechanical Engineering and Nuclear Engineering from the University of Michigan and spending two postdoctoral years at Cornell University, he joined the Nuclear Engineering Faculty at MIT in 1965. From early research in theoretical studies of particle and fluid transport, he became broadly involved in atomistic modeling and simulation of materials. He edited the first edition of the Handbook of Materials Modeling as well as Spectroscopy in Biology and Chemistry: Neutron, X-Ray, Laser (1974) and Materials Interfaces: Atomic-Level Structure and Properties (1993). Other books include the monographs, Foundations of Neutron Transport Theory (1967), Neutron Molecular Spectroscopy (1968), and Molecular Hydrodynamics (1980), and a text, Nuclear Radiation Interactions (2014). He received Guggenheim Fellowship, US Senior Scientist Prize of the Alexander von Humboldt Foundation, Distinguished Alumnus Award of the University of Michigan, and the Robert Cahn Award. A Fellow of the American Physical Society, he became Professor Emeritus in 2009.