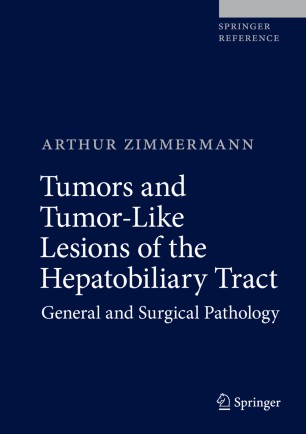 Tumors and Tumor-Like Lesions of the Hepatobiliary Tract

This book covers all liver tumors and lesions that clinically and radiologically mimic liver tumors. It provides readers with a comprehensive overview of this complex and rapidly evolving field. All aspects of surgical pathology are addressed, supplemented by detailed presentations of the lesions’ cell-biologic and molecular features. In addition, the methods employed for diagnosis and diagnostic algorithms are discussed. It appeals to pathologists and hepatologists and serves as an invaluable aid to diagnosis.
The field of liver tumors and tumor-like lesions in adults and children has experienced tremendous advances in recent years. Specifically, the recognition of novel entities, deepened insights into known tumors, and refinement of classifications have necessitated continual updates and reappraisals. In addition, previous understanding of hepatic carcinogenesis and tumor progression has been transformed by the very rapid evolution of our understanding of cell biology, genomics, signaling pathways, cell interactions, and mechanisms of invasion and spread of hepatic tumor cells. These general pathology issues must be combined with surgical pathology if a comprehensive understanding of liver tumor pathology is to be achieved.

Professor Arthur Zimmermann is an internationally known specialist in hepatobiliary tumor pathology. After his training as pathologist at the University of Berne, he worked in basic research for several years, focusing on tumor cell growth regulation, tumor cell locomotion and protein kinase
signaling. As acting director of the Institute of Pathology of the University of Berne (more than 150 persons work in diagnostics, basic research and student teaching), he implemented the most modern methods of cell biology and genome studies. Professor Zimmermann analyzed more than 20'000 liver
specimens, detected several new tumor entities, and was an author or coauthor of more than 500 publications in this field. Furthermore, he was one of the editors of the very successful book Pediatric Liver Tumor (Pediatric Oncology Series Book, Springer, 2011).
As chapter author, he participated in several well-known books, including Blumgart's Surgery of the Liver and Biliary tract, the Oxford Textbook of Oncology (2nd ed., Oxford Univ.Press, 2002), Felix Lee's
Liver Cancer : New Research (Nova Publishers, 2006), Bleyer and Barr's Cancer in Adolescents and Young Adults (Springer, 2007), Rodés's Textbook of Hepatology (Blackwell, 2007), the WHO Classification of Tumors of the Digestive System (2010 edition), Saxena's Practical Hepatic Pathology
(Elsevier, 2011 ), and Pizo and Poplack's Principles and Practice of Pediatric Oncology ( Lippincott, Williams and Wilkins, 2011 ).
Professor Zimmermann developed the world pathology review center for the multinational SIOPEL liver cancer treatment studies. Together with COG, SIOPEL is the largest Study Group for liver cancer in children, and many hundreds of patients are currently taken care of worldwide. In his function as head of the review and consulting center, Professor Zimmermann developed a new classification of pediatric liver tumors (the SIOPEL Classification).