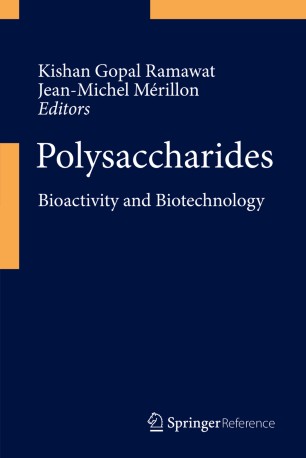 This authoritative reference work presents comprehensive information about one of the most important and most wide-spread classes of (bio)organic compounds: the polysaccharides. The comprehensive and thoroughly up-to-date handbook presents the sources, identification, analysis, biosynthesis, biotechnology and applications of important polysaccharides likes starches, cellulose, chitin, gum and microbial polysaccharides. Polysaccharides can exhibit complex structure and various functional activities. These bio macromolecules can therefore serve as raw materials for various different materials, e.g. rayon, cellulose acetate, celluloid and nitrocellulose; and they find multiple applications, for instance as surgical threads (chitin), as sources of energy, dietary fibers, as blood flow adjuvants, in cosmetics, emulsion stabilizers, film formers, binders, viscosity increasing agents or skin conditioning agenta, as food additives in gums, chewing gum bases and as vaccines. Polysaccharides form the basis for useful products, like xanthan gum, dextran, welan gum, gellan gum, diutan gum and pullulan. Some of the polysaccharide-derived products have interesting and useful properties and show biological activities, such as immunomodulatory, antibacterial, anti-mutagenic, radioprotective, anti-oxidative, anti-ulcer, antidepressant, anti-septicaemic or anti-inflammatory activities. All these applications and properties of polysaccharides are for the first time compiled in a thorough and comprehensive overview in the present work. This reference work is organized thematically in four parts: Part I. Polysaccharides: Occurrence, Structure, Distribution and Biotechnology. Part II. Methods. Part  III. Bioactive Polysaccharides. Part IV. Polysaccharides as Food. This reference work is edited by experienced experts, all chapters are written by well recognized international specialists. It is useful to all those working in the field of botany, phytochemistry, pharmacy, drug delivery, molecular biology, metabolomics, forestry, environment, conservation, biotechnology and NGOs working for forest protection.

Prof. Dr. Kishan G. Ramawat is Former Professor & Head of the Botany Department, M.L. Sukhadia University, Udaipur, India, and can look back on longstanding research experience. He received his Ph.D. in Plant Biotechnology in 1978 from the University of Jodhpur, India and afterwards joined the university as a faculty member. In 1991 he moved to the M.L.Sukhadia University in Udaipur as Associate Professor and became Professor in 2001. He served as the Head of the Department of Botany (2001-2004, 2010-2012), was in charge of the Department of Biotechnology (2003-2004), was a member of the task force on medicinal and aromatic plants of the Department of Biotechnology, Government of India, New Delhi (2002-2005) and coordinated UGC-DRS and DST-FIST programmes (2002-2012). Prof. Ramawat had done his postdoctoral studies at the University of Tours, France from 1983-85, and later returned to Tours as visiting professor (1991). He also visited the University of Bordeaux 2, France several times as visiting professor (1995, 1999, 2003, 2006, 2010), and in 2005 Poland in an academic exchange programme (2005). Through these visits in France, Prof. Ramawat and Prof. Mérillon established a strong connection, which has resulted in productive collaborations and several book and reference work publications. Prof. Ramawat has published more than 170 well cited peer reviewed papers and articles, and edited several books and reference works on topics such as the biotechnology of medicinal plants, secondary metabolites, bioactive molecules, herbal drugs, and many other topics. His research was funded by several funding agencies. In his research group, Prof. Ramawat has supervised doctoral thesis of 25 students. He is an active member of several academic bodies, associations and editorial boards of journals.

Professeur Dr. Jean-Michel Mérillon is the « Directeur de l’EA 3675 (Groupe d’Etude des Substances Végétales à Activité Biologique + Polyphénols Biotech) », at the Faculté de Pharmacie, Université de Bordeaux, Institut des Sciences de la Vigne et du Vin, in Villenave d’Ornon, France. He received his M.Pharma. (1979) and Ph.D. (1984) from the University of Tours in France. He joined the University of Tours as assistant professor in 1981, became associate professor in 1987. In 1993 he moved to the faculty of Pharmacy, University of Bordeaux, France, accepting a position as full professor. He is currently leading the “study group on biologically active plant substances” at the Institute of Vine and Wine Sciences, which comprises 25 scientists and research students. The group has been working on phenolic compounds from vine and wine for many years, mainly complex stilbenes and their involvement in health. Prof. Mérillon has supervised the doctoral theses of 19 students. He is involved in developing teaching on plant biology, natural bioactive compounds and biotechnology.  Prof. Mérillon has published more than 145 research papers in internationally recognized journals, resulting in an H index of 35 (documents published between 1996 and 2015). He has co-edited books and reference works on secondary metabolites and biotechnology. Throughout his career, Prof. Mérillon has traveled widely as a senior professor. Scientists from several countries have been and are working in his laboratory, and his research is supported by funding from the Aquitaine Regional Government, the Ministry of Higher Education and Research, and various private companies. In 2004, he founded the technology transfer unit “Polyphenols Biotech”, providing support for R&D programs for SMEs and major groups from the cosmetic, pharmaceutical, agricultural and health-nutrition sectors.