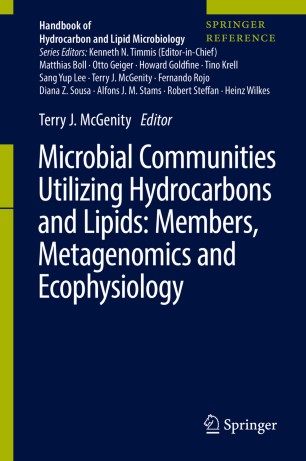 This book provides comprehensive, authoritative discussions about microbial communities in environments that are rich in hydrocarbons, crude oil or lipids. It encompasses natural environments, such as tar sands, oil seeps and reservoirs, as well as habitats where methane is produced. Equally, the book deals with habitats that have been influenced by human activity, including oil-contaminated soils, aquifers, coast and seas. The book opens with a series of chapters considering the contemporary approaches used to investigate microbial communities.

Terry McGenity is a Reader at the University of Essex, UK. His PhD, investigating the microbial ecology of ancient salt deposits (University of Leicester), was followed by postdoctoral positions at the Japan Marine Science and Technology
Centre (JAMSTEC, Yokosuka) and the Postgraduate Research Institute for Sedimentology (University of Reading).  His overarching research interest is to understand how microbial communities function and interact to influence major biogeochemical processes. He worked as a postdoc with Ken Timmis at the University of Essex, where he was inspired to investigate microbial interactions with hydrocarbons at multiple scales, from communities to cells, and as both a source of food and stress. He has broad interests in microbial ecology and diversity, particularly with respect to carbon cycling (especially the second most abundantly produced hydrocarbon in the atmosphere, isoprene), and is driven to better understand how microbes cope with, or flourish in hypersaline, desiccated and poly-extreme environments.
He was already section editor at the first edition of this multi-volume Handbook of Hydrocarbon and Lipid Microbiology (2010),  and he is co-editor for the 17-volume Hydrocarbon and Lipid Microbiology Protocols 2016.