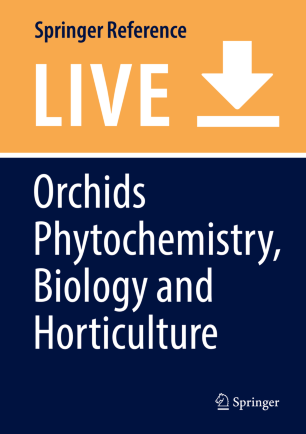 This reference work provides an authoritative and comprehensive review of the latest developments in orchids’ biology, biotechnology and phytochemistry, and it also explores the applications of orchids in medicinal chemistry, nutrition and cosmetics industry. Chapters from expert contributors are organised into six sections and cover the entire gamut of orchid research and uses. In this work, readers will learn about topics such as biogeography and diversity of orchids, their biology and environmental factors, their horticulture and phytochemistry, and their use in agri-food, medicinal and perfumery industries.

This book will appeal to graduate students, scholars, researchers interested in botany, agriculture, pharmacy, biotechnology and phytochemistry. Industrial scientists and those involved in marketing flowers and phytochemicals, plants and their extracts will also understand the importance of this reference work.

Professor Dr. Jean-Michel Mérillon received his M.Pharma. (1979) and Ph.D. (1984) from the University of Tours, France. He joined the University of Tours as assistant professor in 1981, became associate professor in 1987. In 1993 he moved to the faculty of Pharmacy, University of Bordeaux, France, accepting a position as full professor. He has been the director of the research group on biologically active plant substances for over 15 years, at the Institute of Vine and Wine Sciences (University of Bordeaux, France), which comprises 25 scientists and research students. The group has been working on phenolic compounds from vine and wine for many years, mainly complex stilbenes and their involvement in health. He is involved in developing teaching on plant biology, natural bioactive compounds and biotechnology.  Prof. Mérillon has published more than 160 research papers in internationally recognized journals, and has co-edited books and reference works on secondary metabolites and biotechnology. In 2004, he founded the technology transfer unit “Polyphenols Biotech”, providing support for R&D programs for SMEs and major groups from the cosmetic, pharmaceutical, agricultural and health-nutrition sectors. He is currently the manager of this unit.

Professor Dr. Hippolyte Kodja received his PhD in Plant Cell Biotechnology from the Faculty of Pharmacy, University of Tours, France in 1988 and joint the University of La Reunion afterwards, as a Professor in Plant Physiology. With a vast teaching and research experience, Prof. Kodja has been exploring the contribution of fungal and bacterial endophytes of vanilla on biosynthesis of vanilla flavor and aroma metabolites, and he is also interested in the characterization of diversity in vanilla flavor production from Madagascar, Maurice and La Réunion by phytochemical, microbiology and sensory analyses, and in the comparative inventories of mycorrhizal fungi of vanilla cultivated on two types of zones: first introduction zone (Caribbean) and adaptation zone (Madagascar and La Réunion). Prof. Kodja has published several research papers in internationally recognized journals on plant biology, physiology and biochemistry, and has co-authored a chapter in the volume “Fungal Metabolites” from the Reference Series in Phytochemistry.