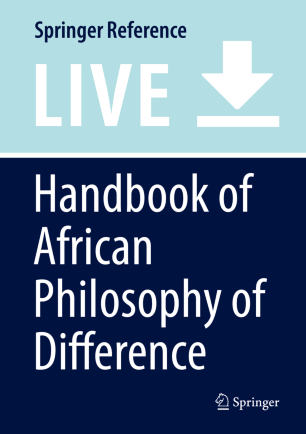 Part of the Handbooks in Philosophy book series (HP)

This handbook explores essential philosophical questions about the experience of difference and the other in African traditional and modern societies. The contributions go beyond a simple discussion of empirical manifestations. They offer a critical analysis of, among other things, the very nature and essence of difference that makes such manifestations possible. Coverage examines the philosophical basis for the African contexts of gender differences, bodily differences and disability; racial, religious, and cultural differences; xenophobia and xenophilia; and issues of the otherings of non-human beings from human beings. This insightful analysis details the ontological, epistemological, and moral foundations of difference and alterity in African societies, both traditional and modern. Readers will gain a deeper understanding into such questions as: What value is placed on the other in African societies? What is the ethics and burden of care for those considered different in African societies? What role does language play in the othering of the other in African societies? This exploration offers an vital contribution to the philosophy of difference. It not only shows the importance of place in such theorization. It also contributes significantly to African philosophical discourse. This handbook will interest both undergraduate, postgraduate students, and researchers in such fields as African studies/philosophy, identity and alterity studies in sociology, and feminist and LGBT studies.

Dr. Elvis Imafidon is Lecturer in the Department of Philosophy, Faculty of Arts, Ambrose Alli University, Ekpoma, Nigeria; and Writing Fellow of the Johannesburg Institute of Advanced Study, University of Johannesburg, South Africa. He is the editor of Ontologized Ethics: New Essays in African Meta-ethics, Lexington Books 2013 (co-editor, John A.I Bewaji), The Ethics of Subjectivity: Perspectives since the Dawn of Modernity, Palgrave Macmillan 2015, and the author of The Rationality of African Traditional Thought: An Introduction, CreateSpace 2013. He is the author of many articles the most recent of which is “Dealing with the Other between the Moral and the Ethical: Albinism on the African Continent” in Journal of Theoretical Medicine and Bioethics (March 2017). He is currently completing a book manuscript at the Johannesburg Institute of Advance Studies titled, White Skin, Black Race: The Philosophical Discourse of Albinism in Africa.