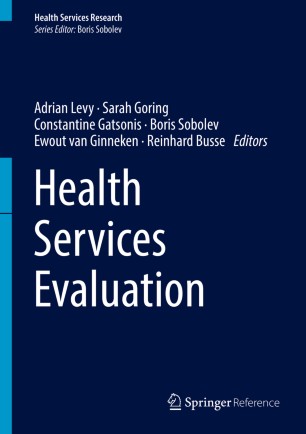 The Handbook of Health Services Research is a reference for all aspects of the field of health services and outcomes research. It addresses the increasing need for comprehensive, yet balanced, information in a field that welcomes various disciplines: medicine, public health, statistics, economics, management, policy, and information technology. This well-organized reference is an indispensable source of information for everyone who seeks to develop understanding of health systems and to learn about historical, political, and socioeconomic factors that influence health policies at the global, national, regional and local level. Specifically, the Handbook helps readers: Recognize core concepts of health services and outcomes research, such as, need, access, equity, quality and safety; Become familiar with social, political, organizational, behavioral and economic theories that have influenced health systems designs; Learn about frameworks developed for evaluating the organization, financing, delivery, utilization and outcomes of health services; Get an introduction to methods of comparative effectiveness research, program evaluation, health technology assessment and health economics; Identify types and sources of data appropriate for generating valid and reliable information about the delivery of health services; Learn about strengths and weaknesses of various research designs used to study health services and policy issues. The online version of the Handbook of Health Services Research is in the format of a dynamically updated knowledge base, offering search tools, cross-referencing across chapters and linking to supplement data, other major reference works and external articles. The Handbook of Health Services Research is accessible at the level of graduate students even if it is not their focus area. This includes students with various backgrounds: medicine, public health, statistics, economics, management or information technology.

Adrian Levy is professor of epidemiology and health services research working at Dalhousie University in Halifax, Nova Scotia. Dr. Levy commenced his academic career working for the Quebec Council for Health Technology Assessment doing applied health research on real-world use of health technologies such as extracorporeal shock wave lithotripsy and complex operations. His doctoral dissertation in epidemiology was completed at McGill University (1998) followed by postgraduate training in economic evaluation at McMaster University (2000). In 2000, Dr. Levy joined the faculty in the School of Population and Public Health at the University of British Columbia and was awarded British Columbia Michael Smith Foundation for Health Research Scholar (2001) and Senior Scholar (2006) awards and a New Investigator Award from the Canadian Institutes of Health Research (2004). There, he linked administrative health databases with patient and treatment registries to study access, quality, and cost of care in cardiac surgery, HIV, and transplant. In 2009, Dr. Levy joined Dalhousie University in Halifax, Nova Scotia, Canada, to serve as head of the Department of Community Health and Epidemiology. As an integral part of the Medical School of the Maritimes, the Department’s collective purpose is to enhance the capacity to improve the health of individuals, patients, communities, populations, and systems, by serving as leaders who generate evidence and apply critical thinking to the health challenges of today and tomorrow. The Department’s faculty generate evidence and engage in knowledge exchange that advances effective and sustainable systems for health services access and delivery. As nominated principal investigator, Dr. Levy led the development and implementation of the Maritime Strategy for Patient-Oriented Research SUPPORT Unit. This initiative, co-funded by the Canadian Institutes of Health Research, offers research infrastructure designed to promote patient-centered outcomes and health services research in Canada’s three Maritime provinces. The Unit’s mission is to lead the development and application of patientcentered outcomes research, and the vision is to enhance the health and wellbeing of individuals and populations in the Maritimes and across Canada. The central goals include advancing research on health systems, knowledge translation and implementation of healthcare transformation, and implementing research at the point of care.

Sarah Goring has an M.Sc. in healthcare and epidemiology from the University of British Columbia and more than 10 years of experience consulting in the private sector, where she focuses on pharmacoepidemiology, evidence synthesis methods, and health services research.

Constantine Gatsonis is Henry Ledyard Goddard University Professor and founding chair of the Department of Biostatistics and the Center for Statistical Sciences at the Brown University School of Public Health. Dr. Gatsonis is a leading authority on the evaluation of diagnostic and screening tests and has made major contributions to statistical methods for medical technology assessment and health services and outcomes research. His current research activity spans the spectrum of evidence-based diagnostic medicine, addresses both methodology and subject matter, and has a major focus on the comparative effectiveness of screening and diagnostic modalities. As the founding network statistician of the American College of Radiology Imaging Network (ACRIN) and a group statistician for the ECOG-ACRIN collaborative group, he has decades-long experience in the clinical evaluation of modalities for diagnosis and prediction in cancer and other chronic diseases. Dr. Gatsonis has served on numerous review and advisory panels. He chaired the NAS Committee on Applied and Theoretical Statistics and is a member of the NAS Committee on National Statistics. He served on the IOM Committee on Comparative Effectiveness Research Prioritization and the NAS Committee on Reproducibility and Replicability in Science and was the founding editor-in-chief of Health Services and Outcomes Research Methodology. Dr. Gatsonis was educated at Princeton and Cornell, was elected fellow of the American Statistical Association, and received a Long-Term Excellence Award from the Health Policy Statistics Section of ASA.

Ewout van Ginneken is coordinator of the Berlin office of the European Observatory on Health Systems and Policies at the Berlin University of Technology. He holds a master’s degree in health policy and administration from Maastricht University in the Netherlands and a Ph.D. in public health from the Berlin University of Technology. His expertise is in comparative international health systems research and health policy research. His main interests include health financing, insurance competition, care purchasing, integrated care, cross-border care, and migrants’ access to care. He has edited several Health Systems in Transition (HiT) reviews including on the healthcare systems of Bulgaria, the Czech Republic, Estonia, Lithuania, the Netherlands, Slovakia, Slovenia, and the United States. He has published widely on these topics in international peer-reviewed literature and the wider literature. Before joining the Observatory, Ewout was a senior researcher at the Berlin University of Technology and a 2011–2012 Commonwealth Fund Harkness Fellow in Health Care Policy and Practice at the Harvard School of Public Health.

Reinhard Busse is department head for healthcare management in the Facultyof Economics and Management at Technische Universität Berlin, Germany. He is also a faculty member of Charité, Berlin’s medical faculty, co-director and head of the Berlin hub of the European Observatory on Health Systems and Policies, member of several scientific advisory boards, as well as regular consultant for the WHO, the EU Commission, theWorld Bank, the OECD, and other international organizations within Europe and beyond as well as national health and research institutions. From 2006 to 2009, he served as dean of his faculty. His research focuses on methods and contents of comparative health system analysis and assessment as well as health services research (with emphasis on hospitals, human resources, cross-border care, health reforms in Germany, role of the EU, financing and payment mechanisms, as well as disease management), health economics, and health technology assessment (HTA). His regular master-level teaching courses at TU Berlin include “Managing and Researching Health Care Systems”; “Health Technology Assessment” (blended learning, i.e., mainly online); “Health Care Management I, Insurance Management”; “Health Care Management II, Provider Management”; “Health Care Management III, Industry Management” (pharmaceuticals and medical devices); and “Health Care Management IV, Health Economic Evaluation.” He is the principal editor of the German textbook on healthcare management (published with Springer, fourth edition 2017), author of a book on the German health system (fourth edition 2017), as well as co-editor of German textbooks on public health (third edition 2012) and on HTA (second edition 2014). Since 2015, he is speaker of the board of the newly founded inter-university Berlin School of Public Health. Professor Busse is the director of the annual Observatory Summer School in Venice, which is directed at policy-makers and has covered a wide range of topics: human resources for health; hospital reengineering; innovation and health technology assessment; EU integration and health systems; the aging crisis; performance assessment for health system improvement; innovative ways of improving population health; integrated care – moving beyond the rhetoric; primary care – innovating for integrated, more effective care; and quality of care – improving effectiveness, safety, and responsiveness. He was the PI/coordinator of the EU-funded project “EuroDRG: Diagnosis- Related Groups in Europe: Towards Efficiency and Quality” (Seventh Framework; 2009–2011). He has been and is also involved in several other EU-funded projects under the Seventh Framework, e.g., on the relationship between nursing and patient outcome (RN4Cast; 2009–2011), mobility of health professionals (PROMeTHEUS; 2009–2011), evaluating care across borders (ECAB; 2009–2013), on healthcare data for cross-country comparisons of efficiency and quality (EuroREACH; 2010–2013), on the impact of new roles for health professionals (Munros; 2012–2016), and on advancing and strengthening HTA (Advance HTA; 2013–2015). Previously, he was PI/scientific coordinator of the EU-funded project “Health Benefits and Service Costs in Europe” (HealthBASKET; 2004–2007). Since 2011, he is editor-in-chief of the international peer-reviewed journal Health Policy. Since 2012, he is the director of the Berlin Health Economics Research Centre (BerlinHECOR, overarching topic “Towards a Performance Assessment of the German Health Care System”), one of four centers in Germany funded by the Federal Ministry of Research. In 2016–2017, he was president of the German Health Economics Association (DGGÖ). Professor Busse studied medicine in Marburg, Germany; Boston, USA; and London, UK, as well as public health in Hannover, Germany. Prior to his appointment at TU Berlin in 2002, he was head of the Observatory’s hub in Madrid, Spain (1999–2002); a senior research fellow in the Department of Epidemiology, Social Medicine and Health Systems Research (1994–1999, finishing with his “habilitation”/second Ph.D.) and a resident physician in the Department of Rheumatology (1992–1994), both at the Hannover Medical School; and a researcher in the Planning Group for a Problem-Based Medical Curriculum at the Freie Universität Berlin (1991–1992). In 1993, he earned a “Dr. med.” (Ph.D. in medicine) from Philipps-Universität in Marburg.